Actions on railroad tracks have a long tradition in the anti-nuclear movement. The Castor transports have turned out to be a sort of Achilles heel of the nuclear industry, by means of which the movement can intervene in the ongoing process chains of the nuclear industry. In response to the protests against the nuclear transports, under the Red-Green government (!) have been built the interim stores at the power plant sites in order to minimize as much as possible the necessary transports. The remaining Castor transports, e.g. in Wendland, have evolved to crystallization points of the resistance. Here various action strategies have been developed to block the transports, to make them more difficult and to boost its material, but in particular its political price, as well as to attract the public attention to the problem of nuclear power in general. There were sit-ins, walks on the rails, gravel actions and other creative forms of action to disrupt the railway traffic, in particular the Castor transports.

To make this wealth of experience available for the young anti-lignite movement, it makes sense to study the technical and strategic importance of the heavy duty trains in the Rhenish lignite mining district. For this purpose the following article may be helpful.

What are coal railroads?

A coal railroad is a track, which serves in particular the connection of a coal mine with the public railway network or direct purchasers such as power plants, briquette factories, ironworks, foundries and coke ovens. It is usually owned by the affiliated mines, an operation by the state constitutes an exception. Legally coal railroads are usually classified as sidings, in some countries they are, as pit sidings, under the supervision of the competent mining authority (eg in North Rhineland – Westfalia).
Frequently coal railroads are used, apart from the transport of coal from the mine, in the reverse direction also for the transport of materials for refilling the coal mine, or for disposal in landfills. This may be slag or tailings (“Sandbahn”, sand train) and / or ash or FGD gypsum from coal power plants (FGD = flue gas desulfurisation).

The strategic importance of coal railroads for lignite mining and its further processing and conversion into electricity.

Because of the gigantic amounts of overburden and coal, which have to be transported in a lignite mine and its exploitation complex, the coal trains run in a very high density. In the Rhenish lignite mining region, 195,000-220,000 tons of coal on average are transported per day, resulting in a train frequency of 5 to 10 minutes in the power plants, according to the need. In total about 800 train movements are carried out per day, for the transportation of coal and overburden, for other runs (factory products, lime, components) and for maintenance and shunting.

The trains used in the Rhenish mining area do not run according to predetermined schedules or on solid relations (round trips) but are used by the current demand. Thus the coal trains, depending on the demand (coal bunkers at the power plants) are controlled after the volumes and especially after the coal quality. Likewise, the compliance with the given patterns for the unloading of overburden in the mine requires an individual control of the transports.

Overall, the whole operation of open pit mines is highly modular organised and downtime of a part of the infrastructure has far-reaching consequences. That’s why the railway network has particularly high maintenance frequencies and generously sized workshops, spare parts inventory and maintenance infrastructure. For th same reason, the main routes of the North-South railroad and the Hambach coal train are built double-railed, so in the event of partial closure of the incident at oncoming traffic, but with significant functional impairment, can be guided single track past the construction site or the fault. Normally, unscheduled downtimes can be buffered by the bunker ranges at the power plants. So such delivery relations, which have only a small consumer-side bunker capacity available, experience particular attention. In the Rhenish mining area, the bunker ranges at the power plants (a normal, quality-oriented filling provided) depending on bunker size, lie at a maximum of two days (Niederaussem), up to four hours. This shows the action potential of small action groups together with party actions, mass sit-ins or actions like mass gravellings of the track bed. In case of planned downtime shifts and the in advance known action days (eg the Grube-Gräbt campaign on Oct. 16, 2010), in particular the small bunkers are paid attention to, by putting pre-loaded trains aside, which can then be used as needed. At full load operation of all power plants this may result (depending on the quality of the offer of the delivering mines) to the fact that up to 12 of the existing 19 train units must stand by with full load. So a suitable action time is to block unexpectedly after a downtime shift.

Even if the goal is not, to block entire power plants or parts of them from the grid, disorders of coal railroads by means of blockades, rail walks, creative actions etc. are a very effective lever. With such actions not only the coal supply is reduced, but also necessary ash transport, removal of excavated material and for transport runs (factory products, lime, components) and repair and shunting are limited, which confuses the finely coordinated movement of the open pit. Not for nothing the coal railroads are referred to as the electrical lifelines of the district.

The heavy-duty railroads in the Rhenish lignite mining area

In order to carry out successful and safe actions in connection with coal railroads, a more accurate knowledge of the operation and infrastructural elements of coal railroads is essential. Hereafter we want to give and popularize this strategic information.

The figure below shows the main lines of the Rhenish lignite mining area, which is completely owned by the operating company. It includes the grid of the heavy-duty railways (180 km length), but also the shunting yards of the factory sites and the track system in the power plant locations which are dimensioned according to BoA (Brown coal power plant with optimized engineering) (in total about 150 km track length) and a total of four railway connections to other, public railway infrastructure. 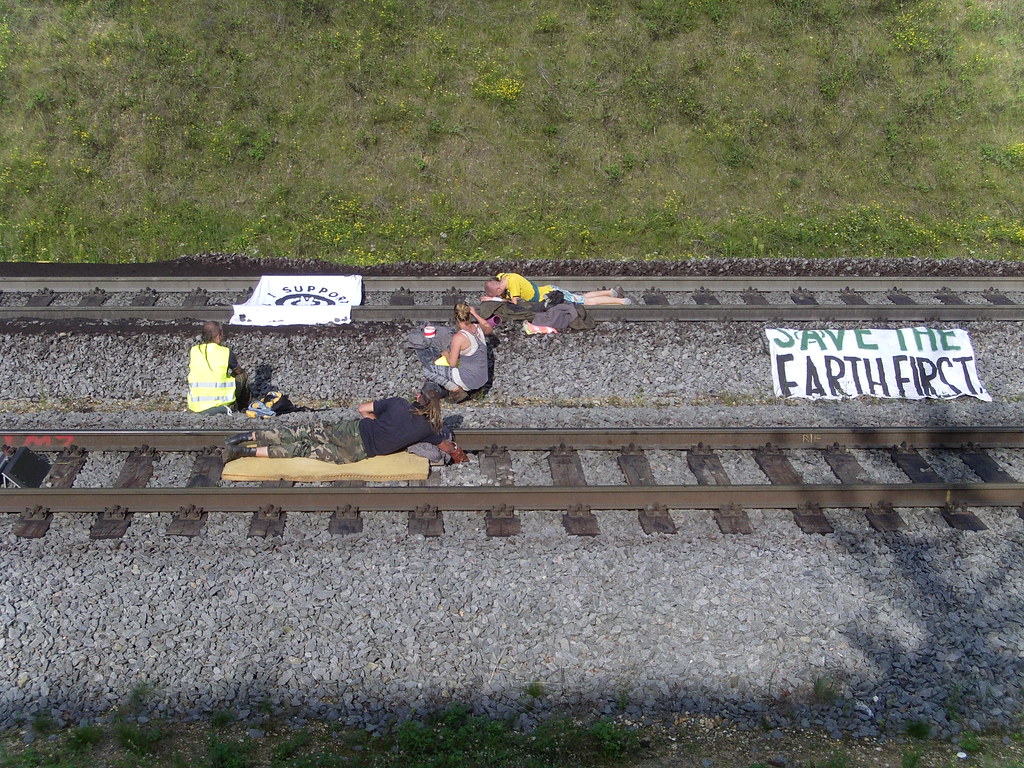 Blockade of the Hambach railroad on the International Action Day, August 1, 2014.

The entire operation of trains on the railways is handled by a central control room, operated by train controllers, which is called Zentralstellwerk Auenheim (signal box Auenheim). In the normal three-shift operation of this central signal tower, three train controllers per shift handle up to 800 trains per day for the transportation of coal, the removal of excavated material and other shipments. The coal trains, depending on the consumer-side demand (coal bunkers of power stations) are controlled after the quantity and especially after the quality of the coal. In order to carry out this planning task best, the train controllers sit together with the planning “Fahrsteiger” (transportation foreman) in one office called “Kohleleitstelle” (central coal control centre). This means that not just the entire transports are monitored and controlled in the central signal box Auenheim, but also that the operation of the railways and coal bunkers internally is managed within the shift, as a logistics service within agreed charging rules after the quantitative and qualitative needs of the power plants. This operations center is to ensure that can be better reacted to any disturbances. 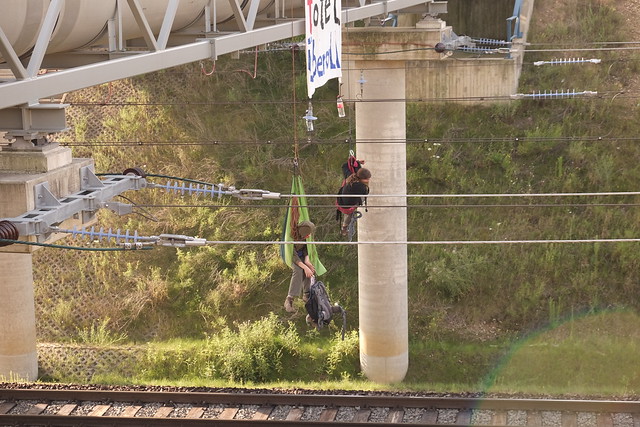 The North-South line and the Hambach line

To maximize its capacity, the railway grid of the main lines (the 33 km North-South line and the Hambach line, 22 km) is generally built double track (full track and empty track), so that the train units can run in an encounter free circular way, with a significantly denser frequency. On the main routes, so-called exchanges are installed (short track connections between the full and the empty track) in order to be able to change to the respective other track in case of maintenance or failure. The maximum travel speed on the main routes is 50 km / h. The maximum braking distance is 300-400 m. A special feature in the Rhenish mining area represents the pushed operation. The signal and track switch distances are designed after the lengths of the operated train sets as well as after the required braking distances. Coal trains with 14 cars and 185 m train length and overburden trains with 10 cars and 155 m train length can be operated on distance runs not only in hauled but also in pushed mode. In contrast, so-called long trains with 21 coal cars and 268 m train length may only be operated in hauled mode. The pushed operation makes it necessary that in addition to the actual signals on the track (a total of 634 light signals and 145 additional signals) further – so-called imitators (total 415) – are set up so that the engine driver, sitting at the end of the train, can recognize the signals in time. The pushed runs are also secured by an optical warning signal and an intermittent tone (loud beeping) which is emitted at the front of the train to warn especially unauthorized persons on the railway grid. The pushed distance run with the locomotive at the end of the train represents a particular challenge for the pre-stop post of a railway blockade. It makes sense to position pre-stop posts at a traffic signal, an additional signal or at imitators, so at a point, which is observed by the the train driver anyway. Signal vests are very helpful and Bengali torches, spotlights, possibly in the form of acoustic signals, gas hooters and banners reading “blockade”. The distance between pre-stop posts and blockade must be stopping distance + train length + safety margin, so that the distance between the pre-stop post and blockade is well dimensioned with 1 km (400 m + 185 m stopping distance train length + 425 m safety distance).

Coal-fired plants generally require enormous amounts of coal. Only the power plant of Frimmersdorf (2200 MW) needs 750 tons of coal per minute! This results in huge transport services that must be provided for the operation. Coal railroads are the key infrastructure of the coal industry worldwide and successful resistance by disorder / blockade of coal railroads can exert serious pressure on the coal industry. Once applied this tactic could also provide inspiration elsewhere for the climate movement, be it in the USA, where over 70% of the coal is transported by trains, in the brown coal mining areas of Poland or in Australia. There for instance, QR National, the largest coal transporter in the world, transports the coal from the mines to the port for export by means of coal trains.

More pictures of the blockade of the Hambach railroad on the International Action Day, August 1, 2014.