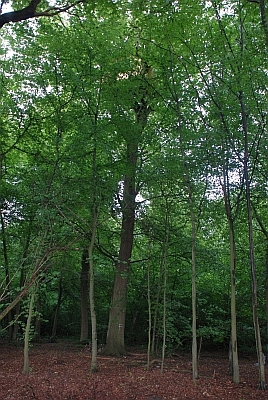 The Hambacher Forest is counted among one of the last remaining mixed forests with their unique ecosystems in Central Europe. Of its original 5,500 hectares, less than one tenth remains today. The Hambacher Forest was once called a ‘citizens’ forest’. Its history goes back several thousands of years – to the end of the last Ice Age, 12,000 years ago. With its diversity of flora and fauna, the forest offers a habitat to a multitude of species including tawny owls, bats and dormice. In the remaining parts of the forest you will find Hornbeam and English oak that are over 300 years old. Many migratory bird species use the forest as a resting place on their journeys. The Hambacher Forest is habitat to many endangered species including the Bechstein’s bat, the medium spottet woodpecker and the dormouse.
Complete deforestation of the woodland may result in the extinction of the dormouse. Whereas RWE is attempting to resettle the endangered species, biologists doubt that the attempts will be successful as it is impossible to create a subtitute for the habitats provided by the old-growth forest.

The energy company RWE (back then Rheinbraun) bought the forest from the surrounding parishes in 1978. Since then the forest is being cleared to make space for lignite extraction. Less than one tenth of the once 5,500ha forest remains today. Whereas deforestation is only permitted between October and March, RWE has been clearing forest illegally outside of this period in the past years. If the mine continues as planned the remaining forest will be destroyed within the next three years.