Authorization for the destruction of the Hambach Forest illegal?

Authorization for the destruction of the Hambach Forest illegal?

“The Bundesländer (German federal states) compile lists of protected areas. These areas are to be listed primarily under the criterion of the protection of species and habitats. They also include already existing protected areas according to the Federal Nature Conservation Act (BNatSchG). In the selection, the states have discretionary powers as far as only nature is concerned. However, none other than natural aspects may play a role in the selection (political expediency, economic and infrastructural interests).” (Emphasis added)

For species and sub-species listed in Annex IV (over 400 species, including many that are also listed in annex II) a strict protection regime must be applied across their entire natural range within the EU, both within and outside Natura 2000 sites (Emphasis added)

This means that under European law, the approval for the destruction of the Hambach Forest is illegal and the state government should have submitted an application to take the forest under protection anyway! The Bechstein’s bat shows us the problem most clearly. Why is it endangered? Because it needs THIS forest, which is unique. As a summer quarter, the wood-dwelling species prefers tree holes. Alternatively, nesting boxes are accepted again and again. But these are not a permanent alternative, as the Bechstein’s bat frequently changes its quarters and therefore relies on a compound system of sleeping places within a radius of around 500 meters, as only is to be found in a forest with many tree holes, so many old trees and a corresponding amount of deadwood. Especially old oaks are important. The resettlement concept is built on the upgrading of younger forests in the area. How does RWE want to conjure up old oak trees? Of course it is possible to relocate the bats. However, as the planted young oak trees do not yet provide sufficient space, no breeding colonies will develop here, despite all the promises.

Did you ask yourself today too, where could be more locked bat caves?
Check this Out:

Only the investigations of BUND were able to shed a light on the importance of the Hambach Forest as a habitat for the Bechstein’s bat (Myotis bechsteinii) which is protected strictly according to the annexes II and IV of the Habitats Directive. In North Rhine-Westphalia this species is “critically endangered”. The few populations can be found in the low mountain ranges and its borders. Hardly any populations are proven on the plains. Eight maternity roosts as well as two important colony roosts are known of in North Rhine-Westphalia.
The Annex IV of the Fauna Flora Habitats Directive, which also includes the Bechstein’s bat, is a list of animal and plant species under special legal protection of the EU because they are rare and worthy of protection. For species and sub- species listed in Annex IV (over 400 species, including many that are also listed in annex II) a strict protection regime must be applied across their entire natural range within the EU, both within and outside Natura 2000 sites..
Of course logging or extraction of lignite are forbidden in such areas!

The refuge area of the Steinheide is also affected by the planning for the open-cast mine, in particular due to the relocation of the motorway A4. An expert’s report, ordered by the BUND from the Institute of Zoology of the Friedrich Alexander University Erlangen-Nuremberg, found that the relocated autobahn A4 would be a “death trap for the Bechstein’s bat”. With regard to the unique ecologically valuable importance for the Bechstein’s bat colony in the area of the Steinheide, the combination of the negative effects due to the relocation of the A4 would not only lead to a clearly higher extinction risk, but the population size of the Bechstein’s bat in the natural geographic unit Lower Rhine lowlands and the Cologne Plainland would also be impaired to such an extent that the species in the whole natural landscape unit would be on the verge of its extinction.

Düren – Against the excavators, even a strictly protected animal species does not arrive: The dormouse must disappear from the Hambach Forest!
Lignite exploitation by RWE destroys the natural habitat of the rodent – the forest will be crushed. 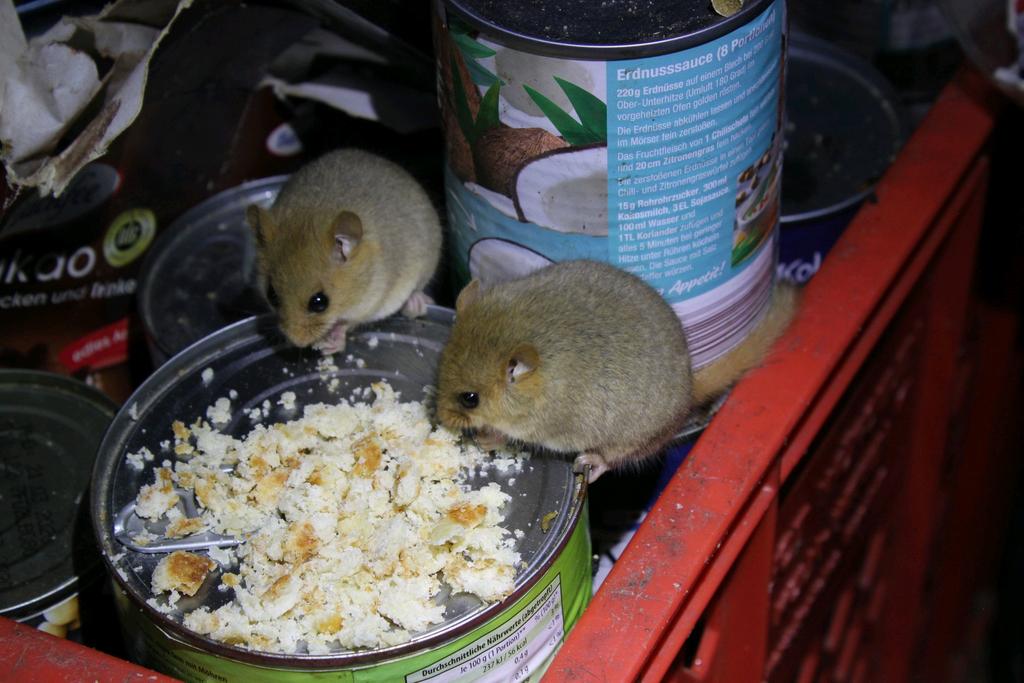 Habitat is destroyed
The company is trying to relocate the dormice, to the meadows at the edge of the Inde creek south of Aldenhoven. One hundred birdhouses are hung on trees in the still-present habitat of small animals.
“The goal is to encourage the dormice in searching for shelter in them and to transport them to the nesting boxes at the grasslands on the banks of the Inde. There are ideal conditions for founding a new population,” says RWE spokeswoman Laura Hoeboer-Schneider.
Animal protectors think that the relocation would be the death sentence for the population! “It is an illusion to assume that animals can be moved without damage,” says Dirk Jansen of BUND. “RWE removes the habitat of many protected and unprotected animal species and plays the creator. It does not work!”
This is an officially sanctioned offense of the nature protection laws. “In the grasslands on the banks of the Inde the conditions are quite different. It’s doubtful if any dormice will survive,” Jansen says.

Apart from the Bechstein’s bat, the little mouse-like dormouse lives with us in Hambach Forest. RWE wants to relocate them: to capture and kidnap them in dormouse boxes😡😱

Carefully open these boxes to see if anyone lives inside. If empty, take the box away.