Unist’ot’en ​​against Chevron and Enbridge

The Unis’tot’en ​​(C’ihlts’ehkhyu / Big Frog Clan) in Canada defend their country against Enbridge, Pacific Trails Pipeline (Chevron), Tar Sands Gigaproject and LNG. “Wet’suwet’en territory, which extends from Burns Lake to the Coastal Mountains, is sovereign territory which has never been ceded to the colonial Canadian state; the Wet’suwet’en are not under treaty with the Canadian government. Their territory, therefore, is and always will be free, and belongs to the Wet’suwet’en people alone.” They just defend their own country.
Since 2009, the Unist’ot’en clan of the Wet’suwet’en ​​hold a permanent community in the way of three approved projects: Northern Gateway (6.1 billion $) of Enbridge, Pacific Trail Pipeline (1.15 billion $) of Chevron and Coastal GasLink (3.7 billion $) of Trans Canada. These pipeline projects were planned through the territory of the Wet’suwet’en. Since the early 19th century the Canadian government tries to expell the Indigenous, who defend themselves by all possible means against it. 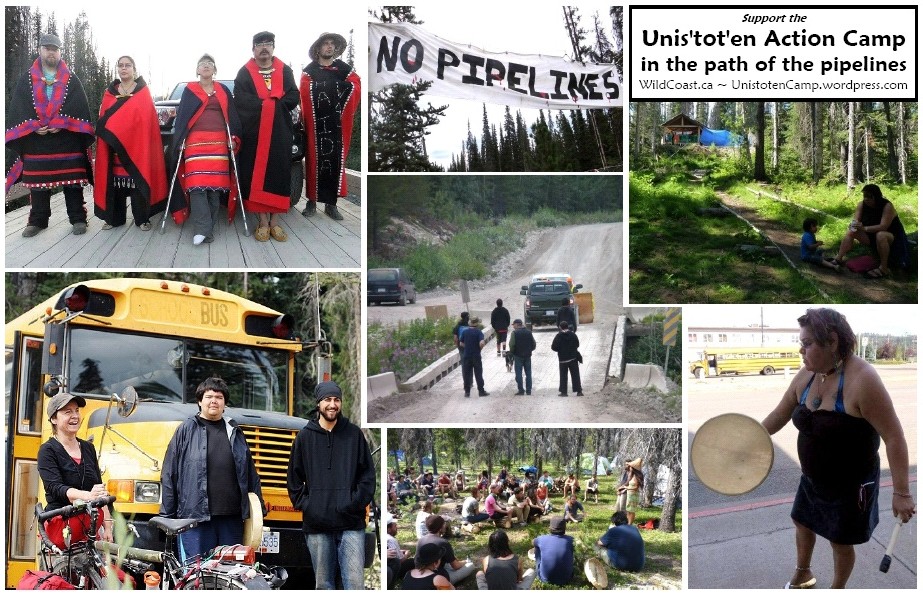 At the entrances there are checkpoints against mercenaries of police and companies. 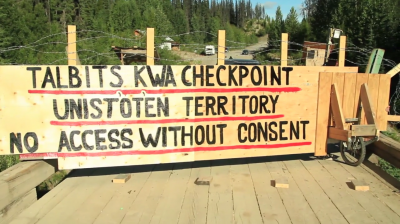 To get to the camp, there is an annual convoy. Participate in the Skill Sharing trainings or support legal safety net against the Canadian government and companies.

Construction of a new hut

In 2014, Aljazeera Plus published a video of the resistance: 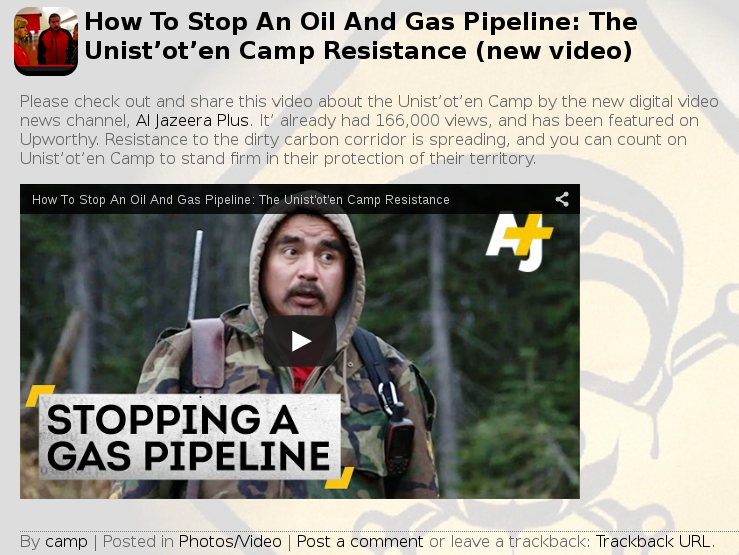 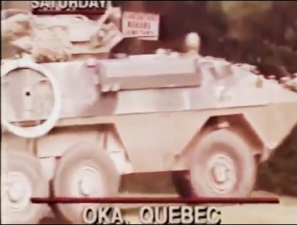 5 minutes introduction video. to the military siege by the police in August / September 1995 on Lake Gustafsen (gmaps, OpenStreetMap) with APC troop carriers. 12 people were condemned to long prison sentences in 1997 (“terrorism”) for defending their country. The last person has been released in 1999. In 2000 Canada tried in vain to force the extradition of James Pitawanakwat from the US. A court in Portland, Oregon, considered the criminalization unlawful and defended the resistance as “legitimate liberation struggle against oppressive governments”

From the website of the University of British Columbia
History, Trial Reports

The siege at Gustafsen Lake has become a controversial event in Canadian history due to government militarization, RCMP smear campaigns, and successful efforts to spread misinformation about the Sundancers. The media were strategically excluded from all but official RCMP accounts of events, resulting in highly skewed reporting. Supporters of the “Ts’Peten Defenders” view the stand-off at Gustafsen Lake as symbolic of the continued efforts of the state to forcibly and violently assimilate Indigenous peoples. Gustafsen Lake is largely underrepresented in mainstream recollections of British Columbian and Canadian histories. PDF

Respect and solidarity with the struggle of the Mohawk!!