Trees occupied in the cutting area – at last! 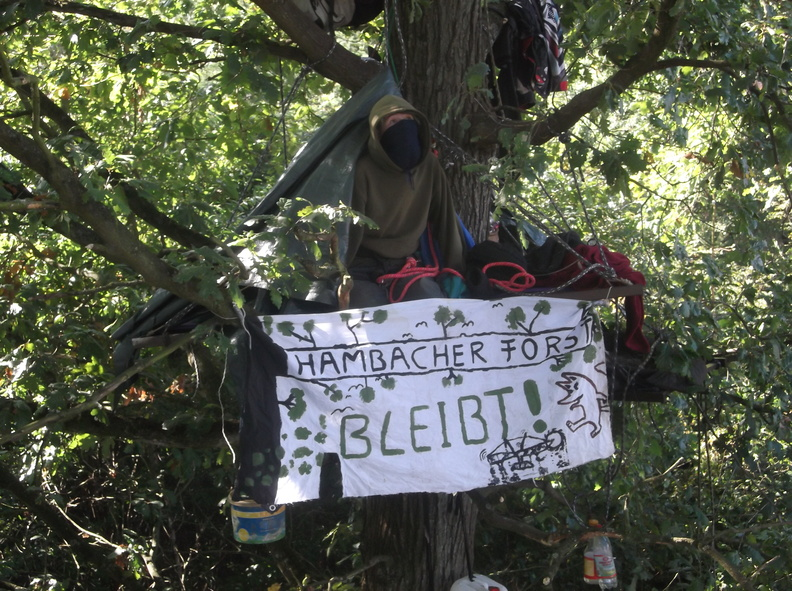 Last night (Tuesday to Wednesday) an action group set up 3(!) occupations in this years cutting area. They are all located on the other side of the old highway, directly in an area where yesterday cutting works took place.

The 3 occupants stay in hammocks, which are each suspended between 2 trees. They are equipped with sufficient water and food, and plan to stay there longer. The new occupation is called “Erster Streich” (First Prank).

The cutting works in Hambach Forest started last week – each year, energy company RWE destroys a strip of 200-400 meters of the forest – to enable the open cast mine Hambach to grow further. The Hambach Forest Occupation reacts by means of several actions, including these new occupations.

Forest occupants off new round in coal conflict

Düren, Nov. 4th 2015. Last night, lignite opponents occupied trees in the acute grubbing vulnerable part of the Hambacher Forst close to the open pit. The aim of the action was to undermine the grubbing work, that started early October.

In the early morning hours of November 4th environmentalists have occupied several trees in the Hambach Forest near Cologne, near the village of Morschenich. The six newly occupied trees are, unlike the previously existing occupations, directly to the grubbing-edge toward the open pit – and thus in the field that the energy company RWE intends to grub up this year.

With the current occupation, which runs under the name “The First Prank”, the now for over three years ongoing conflict between RWE and the forest occupants goes into another round. In the fall of 2014 an occupation on the grubbing-up edge resulted in almost daily actions of the occupiers and in countless police operations.

Once again, the activists seem to have prepared for a longer time in the trees. Equipped with hammocks, water and food, they climbed to the crowns of oaks and beeches and settled down for the days to come. More actions are expected.

On their website they show solidarity with the three prisoners from the Hambach Forest, who are in custody in Aachen and Cologne for several weeks. Under the motto “Free the T(h)ree!” the activists call on to a rally in front of the jail JVA Ossendorf in Cologne on Friday, 4 pm, and to international solidarity actions.

For details on the prisoners go to abcrhineland.blackblogs.org