Meanwhile a more credible claim of responsibility has been posted at indymedia. At this point, we do not want to comment nor torate it, we only want to report on it and to stimulate discussion. Nevertheless, thanks to the author(s) of this second letter, which certainly also will resolve some of the confusion within the “scene”.

Declaration on the cable fire in the Hambach mine

We speak up as those who caused the breakdown of the lignite mining in the Hambach open pit last Sunday morning, April 24, 2016. As a target of our attack we chose the uncovered ground lines between the coal bunker and the conveyor belts collection point. With these cables all excavators, spreaders and conveyor belts are connected. The cables pass from the substation on the western edge of the pit near Oberzier, where is transformed from 280kV down to 30kV, to the conveyor belts collection point on steel frameworks at a height of about 20 – 200 cm. Including the insulation they were about 10 cm thick.
In order to achieve a secure effect on as many cables as possible we poured and ignited tremendous loads of petrol under the cables. Near the fire, there were neither buildings nor equipment to which the fire could have jumped over. There also were no people around. The various blackouts were accompanied by bright flashes, visible in the entire pit. They were due to the discharges of the power cables as soon as the insulation was melted away. Our action was not only directed against RWE, but also against the dominant conditions. In a world where capital interests are in the foreground and the power structure ruthlessly pushes through its myopic interests against all odds, and against humans and nature, a radical resistance is needed. We want to oppose a resounding “NO” to this system, as a first step to tilt this balance of power at some point.

Below you find what happened on April 28

Unfortunately, there is bad news. Today both remaining camps were evicted, the residents fled (including the guests of the Action Week) for the most part into the woods. Eleven people are still detained, one person is seriously injured in hospital (after yesterday’s police attack).

“Fear not, hardships are made to be temporary”.
Repression against the opposers of Fennovoima-Rosatom nuclear power plant project continues: and it’s getting worse and worse. On Friday 4/29 two protest camp sites got evicted at Pyhäjoki, Finland. Police operations were, on Finnish scale, massive. Not big. Massive. Present were roughly 20 police vans, officers in riot gear, border patrol’s helicopter, sections from both national SWAT teams, dog units and specially equipped riot vans.

Police declared the eviction of both camp sites by presenting a legally vague, written police order without even specified locations of the camp sites or other information. Just an order to leave and a declaration that police will arrest everyone „under the police law“ it considers to „be connected to locations“ or „able to disrupt public order“.

The majority of the protest campers and the “Reclaim the Cape” action week participants grouped up and vanished into the forests without negotiating with the police. more…

Mai 2016 in the WAA and surroundings

∗ It starts on Mai 8: organised Walk in the Hambach Forest.
∗ Games night on Mai 10 in the WAA
∗ Antifa Café on Mai 12
∗ and an event on Mai 8, the memorial day to the liberation from the Nazis in KOMM Düren.
∗ In Jülich will be on Mai 14 the Concert & Solidarity Show Open Frontiers for All!.
∗ The Kitchen Collective invites on Mai 18 Küfa and film night in the WAA.
∗ End of the month in Düren Antifa concert on Mai 21
∗ 05/23 – 06/12 Construction weeks in the WAA. more…

These two events were reported in the last days:

We don’t have more details at this moment, we will report further in any case, if there is something new. And if anyone has more info / eyewitness accounts, please contact us! (Mails through our contact is automatically encrypted).
The second event remembered a reader of the German version of this site to the Reichstag fire in 1933, when the Nazis used (and probably lighted) this fire to start the prosecution and elimination of their enemies.

RWE stockholders meeting 2016 in Essen (Germany) was met with outside protest and constant inside disruptions by over 70 activists from groups ranging from Fossil Free and Greenpeace to groups and projects engaging in anti coal blockades and direct actions such as Hambacher Forest, Robin Wood and Indigenous Groups from Siberia resisting the eviction of their villages by coal mining projects linked to RWE. The protests and actions started a day before and during the night with stencils on the pavement and walls around the headquarters of RWE and the convention centre. During the morning tables, banners and inflatables were set up outside of the entrance to the convention hall that was being guarded by both local police on the outside and private security firms inside. Approximately 40 activists got inside as part of the Critical Shareholders action to be at first met with pat down and metal detector searches followed by a large dose of green washing displays and presentations. All the computer stations containing RWE propaganda were promptly redirected to the home page of the Hambach Forest occupation http://hambachforest.blogsport.de/information-about-the-forest/ and remained showing an eco/defense response to coal mining info, attentively read throughout the meeting by stockholders, next to RWE employees happily handing out corporate schwag. Before the actual meeting begun, the setting was rather surreal with activists connecting and taking Virtual Reality tours of RWE coal mines and its diggers, as waiters served drinks to an older and more conservative demographic all around. more…

Currently every corner of the WAA house in Düren and on the meadow occupation in the Hambach Forest are searched …
Come around, we do not know how long any report will be possible.
The repression against the environmental movement in the Rhineland is increasing.
+++ Important: New contact number +49 15759103780 +++

The newspaper Aachener Zeitung ( see article http://www.aachener-zeitung.de/lokales/region/pferde-hunde-hubschrauber-grossrazzia-am-hambacher-forst-1.1335124 ) sees a connection to offences, allegedly committed in late February. At that time the police claimed that their forces, who should accompany / enforce the deforesting work on the final day of the grubbing season, were fired at with slingshots. One person was arrested then, but after a short time released again. There seems to be video footage of the reported incident.
A dog handler with his dog is searching the meadow. What the dog is trained for, is not known.

Come to the meadow and the WAA, so that the police there can not continue searching everything unobserved !!!
Show your solidarity! Spread this information and support the local people! 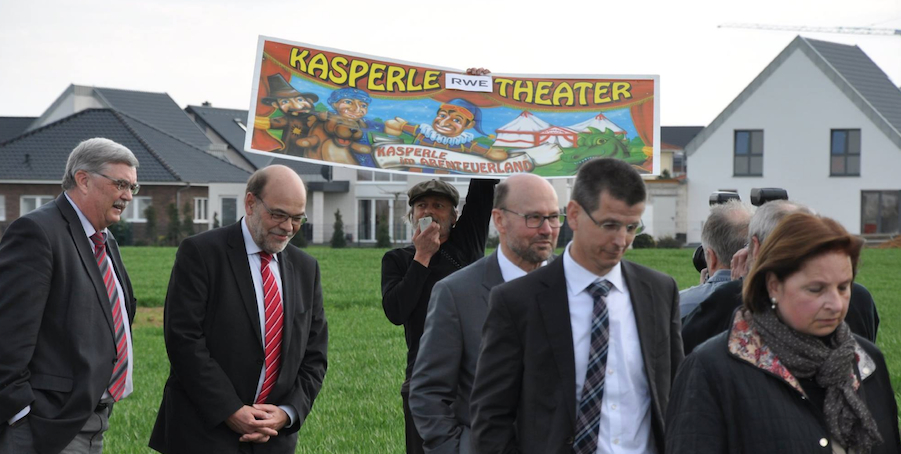 The ground-breaking ceremony in favour of the relocation of the villages Keyenberg, Kuckum, Lower and Upper Westrich and Berverath was a disaster for RWE and the state government of North Rhine-Westphalia.
Hans Josef Dederichs, a green member of the municipal council in Erkelenz, read out a letter of 50 potential evacuees to all responsible local and regional politicians, under the eyes and ears of Franz-Josef Lersch-Mense, minister for European affairs in the state government of North Rhine-Westphalia. In this letter was clearly listed what is going wrong in the preparations of the resettlement and that under the given conditions wide resistance must be expected. The reaction was great applause. more…

Solidarity picture from the Skills Sharing Camp of spring 2016, on the occupied meadow next to the Hambach Forest with the detained protesters against the Milan Expo on 05/01/2015
http://www.noexpo.org/english/

We are very pleased with the following message:

Our compa Huba, who was in custody since March 22, is free again!

When he was about to leave the room after Sara’s trial, his way out was blocked by police in plain clothes and judicial officials. They told him that he was searched with an open arrest warrant (justified by a risk of absconding) and they led him away in handcuffs.

For more information on Huba’s arrest and jail stay can be found at ⒶBC Rhineland.

Source (in German)
More in English: Huba in jail

The anniversary of the meadow occupation in Hambach Forest comes soon and we want to celebrate it with a party on the site. It will be on the 14th of April from 18.00h on. We would be happy to meet and have a good time with all our supporters, neighbours and refugees who want to party with us.

There will be an open DJ with awesome music but feel free to bring your own music with a USB stick. Delicious vegan food will be provided too (there’s no good party with an empty stomach). You are very welcome to bring some food to share with everyone as well!

There’s plenty of space to sleep on the field and forest but you’ll have to bring your own tents. As always, any donations would be very helpful for the food and other necessities. You can check our wish list (hambachforest.blogsport.de/join-in/donations/) and, who knows, maybe you can bring something along.You can check on Contact&Directions how to get to us.

Hope to see you all!