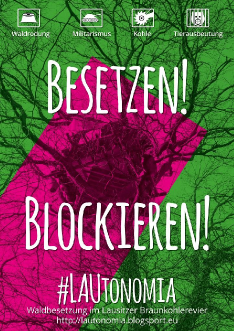 deutsch | français | español
Today, May 18th 2016, the Forest occupation in the Lusatian lignite mining area is cleared by the police.

The occupation has existed since the beginning of March 2016. The Lusatian lignite mining area near Cottbus / Brandenburg is operated by the energy company Vattenfall and is one of the 4 lignite coalfields located in Germany.

The tree occupations in Lusatia and Rhineland are allegedly obstacles to further grubbing works, related to the expansion of the opencast mines. We can not consider this struggle just from our perspective – many other people and groups are active on our side.

During the days before, there have been around the occupation increasingly so-called “checks without suspicion” of vehicles, cyclists and pedestrians whenever they matched in the eyes of the police with a scheme based only on appearance.
Then this morning, our friends were woken up by police who surrounded our tree houses and began to destroy the traverses between them.
Any reason for the eviction was not disclosed, even after repeated requests. Ultimately, however, one of the officers deigned to tell us that the evacuation was carried out entirely without reason.
Then, while under the trees, the first of many arrests were carried out and our friends partially were carried out of the forest, a unit of climbing cops made ready to storm the tree houses. Probably a proper, at least halfway safe lift was too expensive. So a wheel loader was used in whose shovel some engineering genius had tied a ladder.
This construction was moved up to the tree houses, although it endangered not only our security in a life-threatening way, but also that of all the others present.
Besides more people were carried out of the forest. Their phones were taken from all of them in order to prevent any communication both with us and with a lawyer, in spite of the legal right of access to them.
The events in the run-up (see Twitter and our blog) can thus have been not just a mere coincidence, as they tried to hoodwink us. Also the time right at the beginning of the Forest Week (see blog) is impossible to see as a coincidence.

We will not be intimidated, not even by this wave of repression, which started some days ago!
We will come back and reoccupy, again and again, until the brown coal mining finally will have been terminated!
Come to the police station in Weisswasser (Open Street Map) to support our prisoners, follow our blog or Twitter for the latest information, take solidarity pictures and come to our new occupation!
We will not be stopped!