Update: E* sentenced in Norway to 45 days in jail 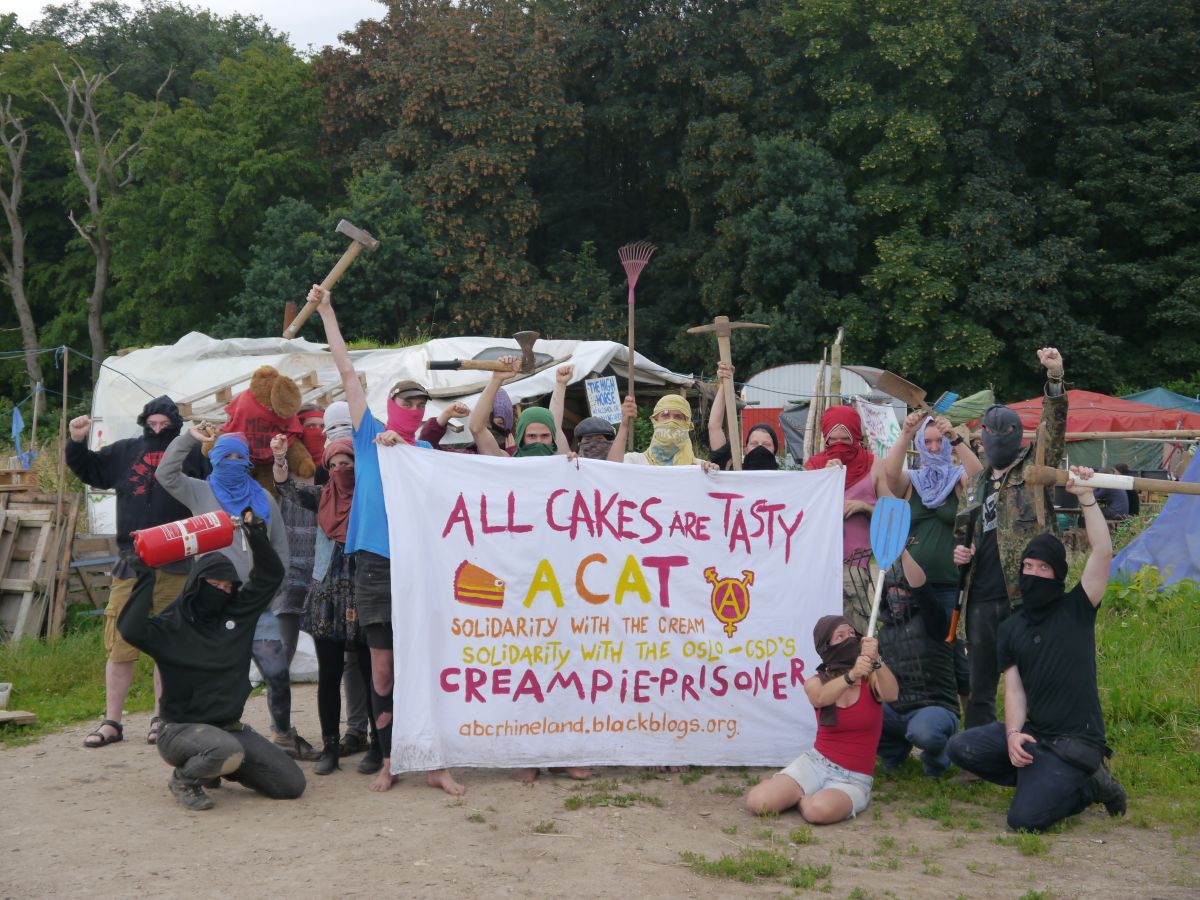 This mail has been sent to us:

Here is an update from Norway, E from Cistem Failure has been sentenced to 45 days in jail for throwing a pie.

On Saturday, the 25th of June, E from Cistem Failure was arrested at the Pride Parade in Oslo, for allegedly throwing a pie in the face of the Norwegian Minister for Equality, who was marching at the front of the parade. The Norwegian police and media called it an attack on democracy. They were held over the weekend until court the following Monday, at which the state asked (and the judge granted) for them to be held on remand in custody until their hearing.

On Thursday, the 7th of July, E had their hearing.
They were convicted of attacking the highest state bodies’ activities, under Straffelovens §115. The next day, they were sentenced to 45 days in prison (more than the precedent of 30 days) and immediate deportation upon release. They have now been in prison for 15 days and we expect them to be released (well, deported…)
around the 7th of August.

The hearing itself (which you can read about in more detail here) was very boring. The highlight was when the cop from the politiets sikkerhetstjeneste came in a print out of the definition of queer anarchism from Wikipedia, and the translator struggled to translate the phrase “gender binary” into Norwegian. This was all because the police recovered a pink and black flag with a queer anarchist symbol on it from the scene of the crime. The cop seemed very impressed with herself that she was able to figure out the meaning of the symbol! We also learned that the cases against the two other people who were arrested for pie-throwing are still ‘open’, but that there is not currently enough evidence to prosecute.

Who is Solveig Horne?

Solveig Horne is a homophobic, sexist and racist politician from the right-wing Norwegian Progress Party. This year, she had the nerve to march at the front of the Pride Parade in Oslo, despite having been booed at previous Pride events. She is supposedly the Norwegian Minister for Equality, Children and Social Inclusion. She is known for victim blaming [“girls who get raped are responsible for the situation they put themselves in”], homophobia [“Is it okay that kindergartens read gay fairy-tales for young children?”],
racism [suggests that there is a particular responsibility on Muslims to attend Pride in the aftermath of the Orlando attacks] and transphobia [promises to deal with transgender persons in the same way as with any other ‘patients’]. The Progress Party is a racist party that wants to steal refugees’ valuables. We suggest that homo- and transphobic politicians who get pied at a
fucking Pride Parade are responsible for the situations they put themselves in.

Anyway, we find the whole idea of politicians attending Pride strange — have they forgotten about Stonewall? People can have Pride as long as it means assimilating into capitalism and shit. I mean, why be homophobic when queers also have voting rights and have money to buy things with? The Pride Parade in Oslo gave their ‘Solidarity Prize’ this year to the fucking police…

What You Can Do

As they are going to be spending the next month in jail, it would be cool if people could write letters, spread the word about the situation, play our music, do a soliparty, whatever. Another thing that we’re doing is making a thrice weekly (Tuesdays, Thursdays and Fridays at 5pm) radio show called Attack on Democracy which E can actually receive in jail. This is made possible by RadiOrakel, a feminist radio station in Oslo (99.3 FM). So if you have any sounds that you
think E would like to hear, send them to cistemfailure@nullriseup.net and
we’ll try to work them into the show.

You can send letters to E to this address here:

If you for some reason are unable to send physical post, you can also email us (cistemfailure@nullriseup.net) and we’ll print it out and make sure it gets to E.

We will any news we have about the situation, as well as any updates we get from E on our blog here.

Solidarity with all the prisoners held by the German state! None are free until all are free. “