Naked action and criticism at the climate camp 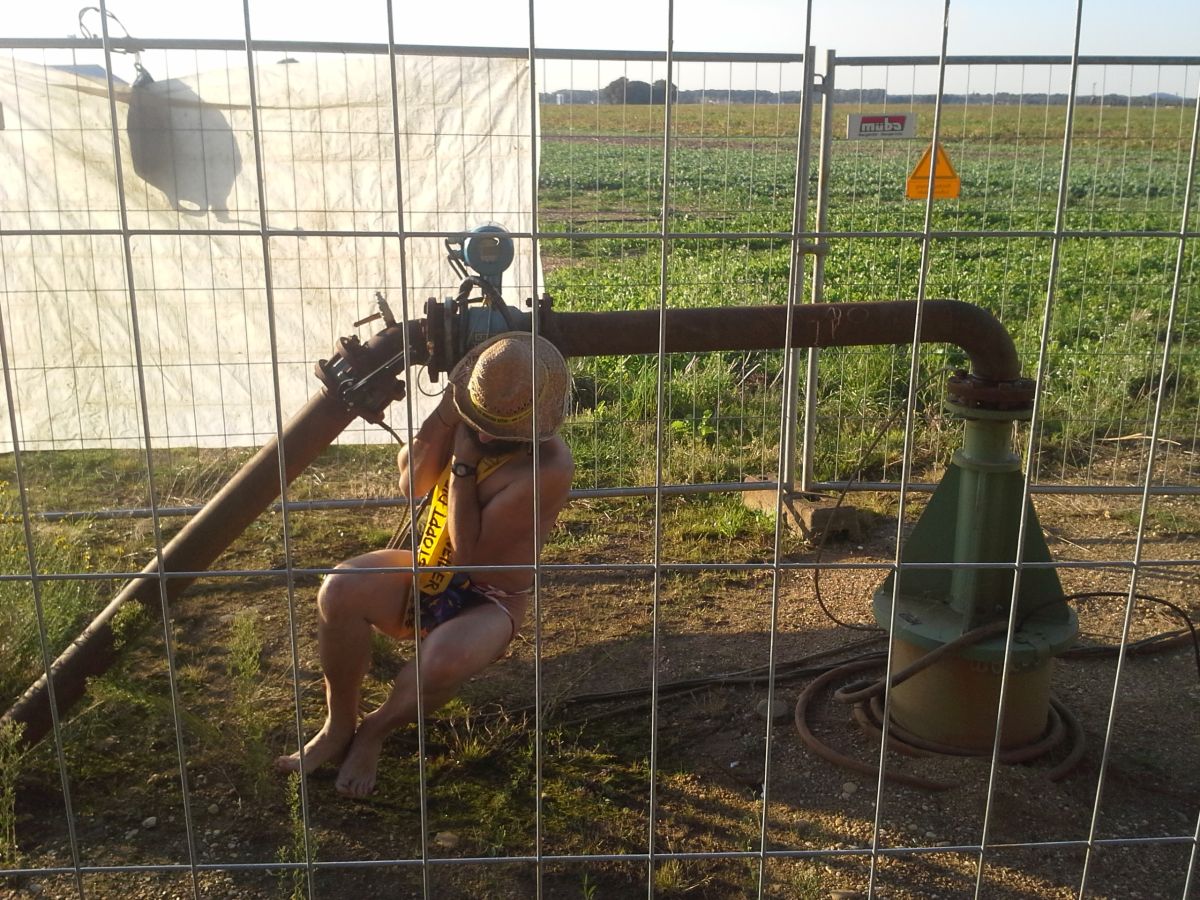 We just received the text below. The action is still going on. All we know is, that this is the β version of the press release. It is written in English. As soon as we know more, we will publish it here.
Update 1: The action has been terminated.
Update 2: About the action: one person chained themself to an RWE pumping station. It was the fenced pumping station at the entrance to the parking of the climate camp. Staging and dramatization seem to have succeeded, about the form and content can be argued, of course.

Once again we choose to put our bodies in the way of climate criminals infrastructure showing how naked we all are when faced with the incoming climate chaos break down by conducting the lock to Climate Criminal RWE infrastructure in the nude and by bringing the attention not towards RWE that is putting this crisis regime in place but also towards ourselves as members of the activist community by addressing and demanding the following seize and be focused on:

1. PRESENCE OF NGOS AND THEIR IMPACT AT KLIMACAMP:
Lack of solidarity to our actions by NGOs bombarding our camp with hundreds of kilograms of bones of the boreal-temperate-rain-forests(paper material) stamped with toxic lip service to their corporate sponsors as they distance, criticize and deconstruct all forms of direct action that is outside of their power structures and that adopts more “radical” aims hence justifying and allowing increasing deadly disappearing of environmental activists from around the world while accepting corporate financial
sponsorship. We hence call that their material not be distributed and allowed in Climate Camp and if it anonymously appears that it be upcycled into paperpachete puppets and ground into insulation for
activist activist barrios etc. This issue is not limited to NGO such a Greenpeace, Nabu, and Bund who refusing to support our movement and actions but also to the Klimate Camp itself overprinting and not
distributing boxes and boxes of fliers that are year specific and them hauling them outdated to each consecutive camp for as many as 3 yrs.

2. CAMP FOOTPRINT OF THE CAMP ITSELF.
We call attention to the ever increasing footprint of the camp itself with consumption of resources such as gasoline from a fleet of vehicles, hundreds of crates of alcohol and sugar based drinks resulting not just in more climate chaos but in camp forgoing of sharing, donation based community models. We call for full transparency of resources used, their estimated carbon and water and social footprint and impact. And as such as call for renewed focus of sustainability, sustainability and rewilding and more focus on acoustic music an not CO driven grid powered sound systems going hand in hand with the consumption of the above mentioned corporate products.

3. INTERNAL FORMS OF REPRESSION
Having for most of our lives being surrounded by profit based philosophies and reality building more activist than are willing to admit are engaging in mutual harm, oppression and unsupportive behaviour. We call on focus on resources and agencies, governmental, public relations and criminal that have historically engaged in destabilization of movements, their infiltration and covert repression. We call for not just workshops on the historical context but also on seting up personal accountability and de-escalation practices.

In Crisis Regime and Pemanent State of Emergency reality, we the naked theorists choose and continue to remind you that another world is possible.”