NODAPL SOLIDARITY BANNER IN THE MEADOW 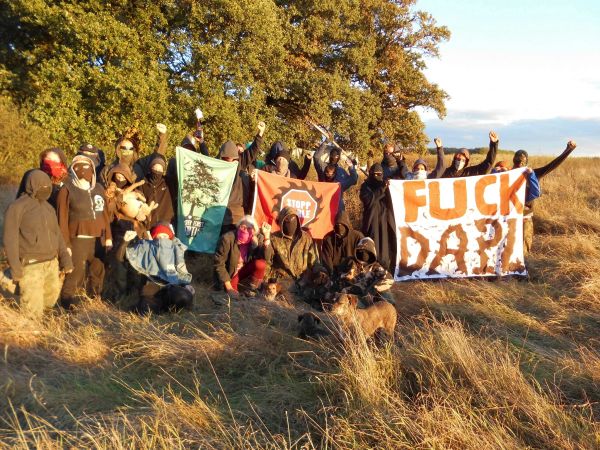 Yesterday in the Meadow a banner of support with North Dakota Standing Sue Indigenous activists fighting Dakota Access Pipeline was made and a message of support extended to all engaged in this struggle. This fight is an extension of hundred year long continuity of resistance to colonialism and ecological destruction.

Background on the NODAPL Resistance: Thousand of indigenous activists and their supporters have established Standing Rock protest camp and blockade in North Dakota preventing Energy Transfer Partners from completing the Dakota Access Pipeline which is a bout to cross the Missouri River, disturbing native burial grounds and affecting drinking water in the area. The struggle has been embraced by many members of the Standing Sue Nation adopting the motto: “Protectors not Protesters”. Numerous actions and blockades have deployed many direct action techniques such as lock-ons, trespassing on the construction site, etc with many injured by high level of repressive violence and hundreds being arrested. The Obama Administration has placed a hold on the project on September 9th after many activists have been attacked with dogs while taking down the fences and entering the construction area. The actions and arrest have continued since however as ETP has continued to take advantage of this, what seems as temporary, down-time by staging and preparing additional equipment on both sides the Missouri River.

Follow this struggle on #nodapl and #waterissacred and express your solidarity not just electronically.