On Monday 12/19 at 6:00 pm is again a concert in front of the walls of JVA Cologne Ossendorf (Rektor-Klein-Str, line 5). A bunch of Street musicians are playing amplified music and there is also open stage which you can fill with your ideas.
Come around, enjoy the music and send greetings to the prisoners.
Bring everything with you for making noise!

At the same time a Benefit-bar for the imprissoned Thunfisch happens at LC 36.
After the concert writing café for prisoners at LC 36.

Against all cages & prisons – Freedom for all prisoners!

“After the recent, massiv attacs by RWE and the police against the anti-brown-coal-resistance in the hambach forest we are now again going on to the offensive.

This night we blockaded the hambach railway. [Ticker: http://hambachforest.blogsport.de/2016/12/12/ticker-blockade-of-the-hambach-railway/]

The last weeks were characterized by police operations with eviction tanks and water guns to protect the clearing works in the occupied hambach forest. At the same time there have been massiv repressions against activists and supporters.

The operations reached its peak with the arrest of Siao, Hodei and Maya. The three are now in the women´s prison in Köln- Ossendorf. In the media it has been given the impression that some of our as „violent“ declared forms of actions are the problem.

The media forgets in that case that RWE constantly goes on with the destruction of our planet.

The problem is not the activism but the brown coal, which is deeply connected with our capitalistic system. With our blockade of the connection between the coal mine and the power plant we want to show RWE that we aren´t paralyzed and that we transform our sorrow over our compas in prison into anger and action!

The problem is the brown coal!

Show your solidarity with the prisoners, write letters & do actions.

The hambach train is standing still!

1:09 Three Persons blockaded the hambachrailway in both directions. One of them is locked oin directly under the stopped hambach train.

1:35 the cops reached the activists

2:00 the connection to the activists is lost, probably the police took the phone away

5:13 Policeinformation (dont trust the Police): „The Policeaction goes on, if the people are arrested they goes to Aachen“ (but now they are in the Lock On)

11:30 Please support the People! Come to the Policestation in Aachen! Its very important that they see some nice People after the sometimes dramatic experiences with Policeviolence !

13:15 The Action has been very successfull. The Police said that the train was blocked until 10am.

This link was sent to us by e-mail:

We want to congratulate our comr@des at Standing Rock to their Victory against the DAPL-project!

WaterDefenders you give us courage and hope to continue our fight!

We share the worries that after the change of presidents the construction stop will be removed. We want to appeal to all to get rid of their stocks of destructive technologies like fracking, nuclear & coal power. And to call all the others which dont have such stucks to make more pressure to the stuckholders. In this area we just know that deutsche bank is stuckholder of the pipeline-project DAPL.

Dont let them allay your suspiciousness! Never surrender! No Compromise! 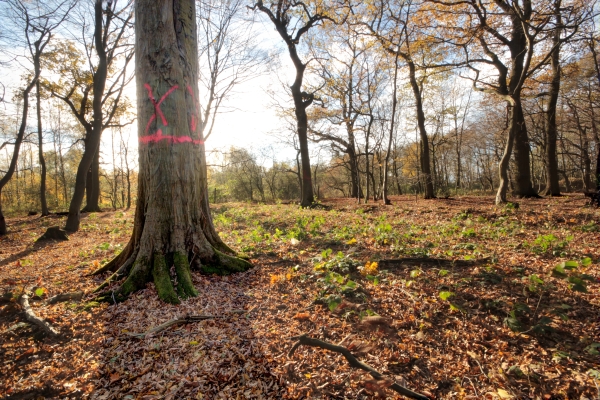 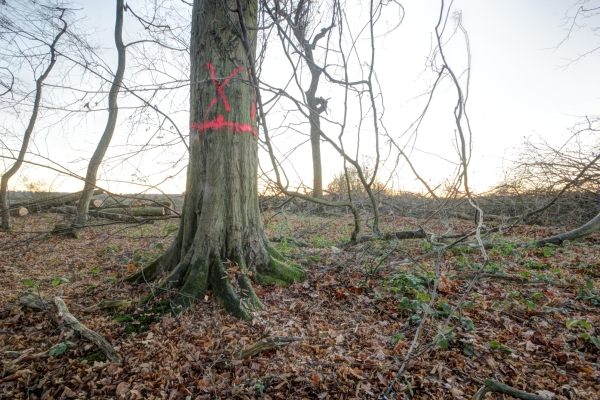 “Who could feel how beatiful it was before, feels also how unmeasureable the lost is.”

At the former trashpit, on the south-western edge of the clearcut, before and after the cutting. More photos are coming later!
more…

This year the first action advent calender started, the idea is: up to Christmas every day some people are going to surprise us all with some action against the clearcut of Hambach Forest. The actions will be published on wortkulturen.de/category/aktionsadventskalender/ (just in German) where are always more pictures than on this blog. If you want to take responsibility to take action for a specific date get in contact with them: 01577/6655450
Below you find an English translation of some of these actions.

— It is like a live ticker: the last opened door is on top —

12th door open!
Occupation of the Hambach lignite railroad:
After the most recent, massive attacks by RWE and the police on the brown coal resistance in the Hambach Forest, we went back into the offensive last night. The Hambach railroad is blocked once more, on both tracks.
Action declaration: https://linksunten.indymedia.org/en/node/199035 (english)

Live ticker (up to now only in German): http://hambacherforst.blogsport.de/2016/12/12/ticker-blockade-der-hambachbahn/ 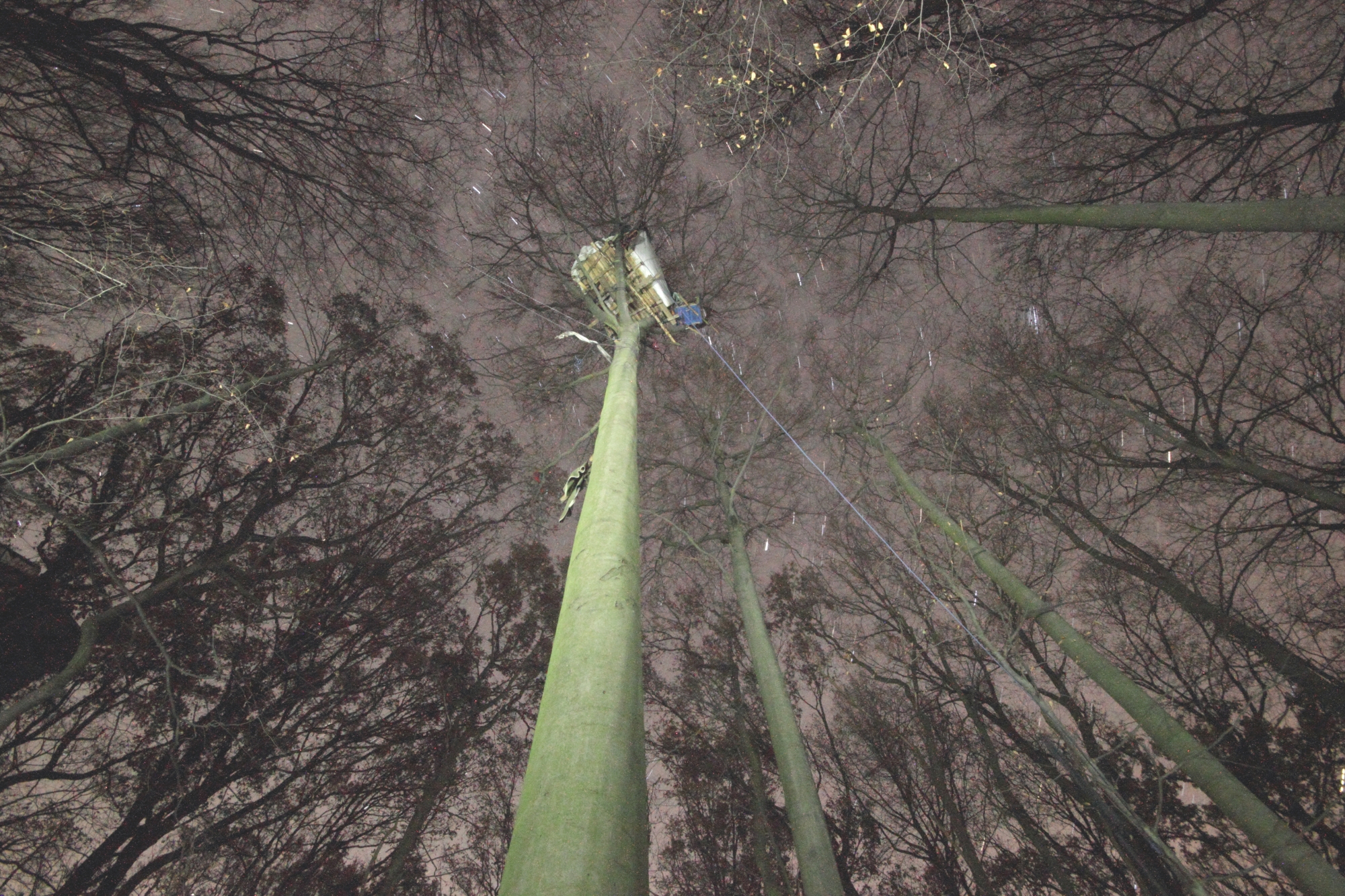 “We are not sitting on thrones,
just the wind is flattering us.
Nevertheless we have crowns,
which are nicer than yours.”
(Erich Kästner, Greetings to Michael)

On December 3rd, one more Person was arrested and is now in Prison on remand.

Since December 1st there are two more activists from Hambach Forest in custody jail.

According to the police, both have been at a treehouse close to the entrance of the forest, when firework was set off towards police officers. Noone got hurt. They are accused of causing an explosion and aggravated assault. Custody jail ist justified by danger of absconding, because both have their residence outside of Germany.

Thuersday noon they had their arraignment in Kerpen and were then brought to the women’s prison in Cologne Ossendorf.

Write letters! Be aware that each single letter is getting checked and controlled by the authorities. Hodei and Siao speak Spanish and English. Add stamps, photos, pictures, leaves, sticker, glitter and other stuff, which brings a smile to the face of our compas and angers the censor. more…

News ticker around the beginning of the grubbing south of the former motorway A4
deutsch<!– | english–>

(The most actual on top)