Let’s stop together racists and neo-Nazis! 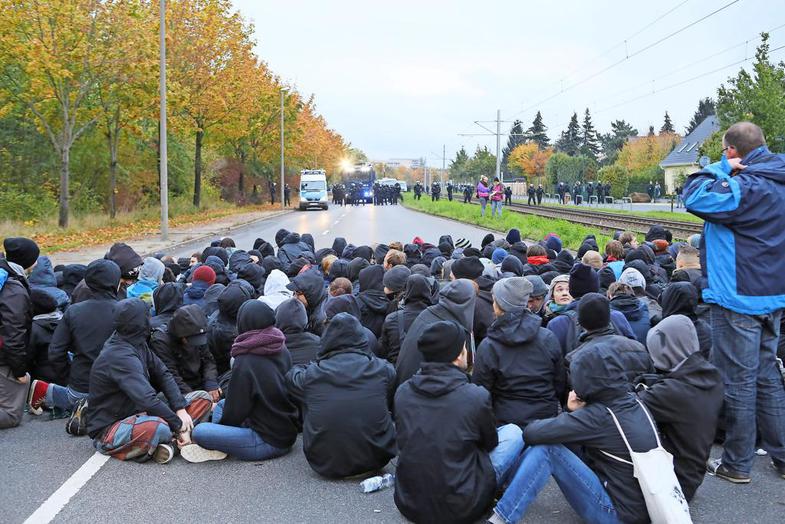 Pro NRW and other right-wing groups want to exploit sexual assaults on women on New Year’s Eve, during the night of January 1, 2016, for their racist agitation.

On the occasion of the anniversary of the attacks, Pro-NRW wants to move from Deutz on 7 January 2017 through the inner city of Cologne, led by the right-wing populist Esther Seitz. Invited are supposedly international speakers, NPD cadres and other neo-Nazis and racists. The motto of the event “No forgiving, no forgetting! One year after the sex pogrom/Cologne” consciously arouses the association to the pogrom against the Jews throughout Nazi Germany, which started on 9–10 November 1938. Thus the fanal for the extermination of the German Jews is equated with the sexual violence of a group of criminal men. The New Year’s Eve events are thus declared a controlled action, the Holocaust, on the other hand, is made a historical marginal. “No forgiving, no forgetting” in the context of a demonstration carried out by Nazis and racists, is the conscious mockery of the victims of the Holocaust and anti-fascist resistance.

On the following Saturday, January 14, 2017, the neo-Nazi thug Jan Fartas from Cologne plans to demonstrate under the same pretext with other militant fascists in Cologne-Kalk. Fartas is a member of the right gang of thugs „Sturm Köln“, he is present at all major Nazi mobilisations regionally and nationwide and he is among other things responsible for racist propaganda in the urban district of Zollstock.
Due to his contacts, among others, with the right-wing scene in the Ruhr area, it is to be expected that Nazis of all kinds will participate and use this action to set a sign of power in the migrant-dominated urban district of Kalk.

Once more the rightists try to abuse the suffering of the victims of New Year’s Eve, one year ago, for their agitation, those forces which themselves have a women despising ideology. The result of this is, inter alia, an increase in racist violence. Also responsible are the established parties, which replaced the “welcome culture” after the New Year’s events by a supposed cultural struggle against Muslims, in order to make further tightening of the laws against migrants more popular (Examples: the declaration of Maghreb countries to safe countries of origin, or the restriction of family immigration).

Köln gegen Rechts (Cologne against the rightists) is fighting for equal rights for all people, regardless of their origin, nationality, sex, religious or sexual orientation. Therefore, we oppose every attempt to take over the streets. Racist propaganda and right-wing rallies can’t become normality.

In recent years, large-scale Nazi mobilization has already been prevented by the massive resistance of many thousands of people, such as the demos of Hogesa and Kögida in 2015. Also for this January we organise demonstrations and blockades, together with other anti-fascist and anti-racist initiatives and alliances. We need you to succeed!

Protest against the march of Pro-NRW
Saturday, 01/07/2017 –
1:30 pm: Demonstration in front of the main station
Together with Köln stellt sich Quer (Cologne puts itself in the way)
Demo and blockades against the Nazi march of Fartas & Friends
Saturday, 01/14/2017
1:30 pm Cologne Ottoplatz/railway station of Deutz