Reflections on the RedLine Action 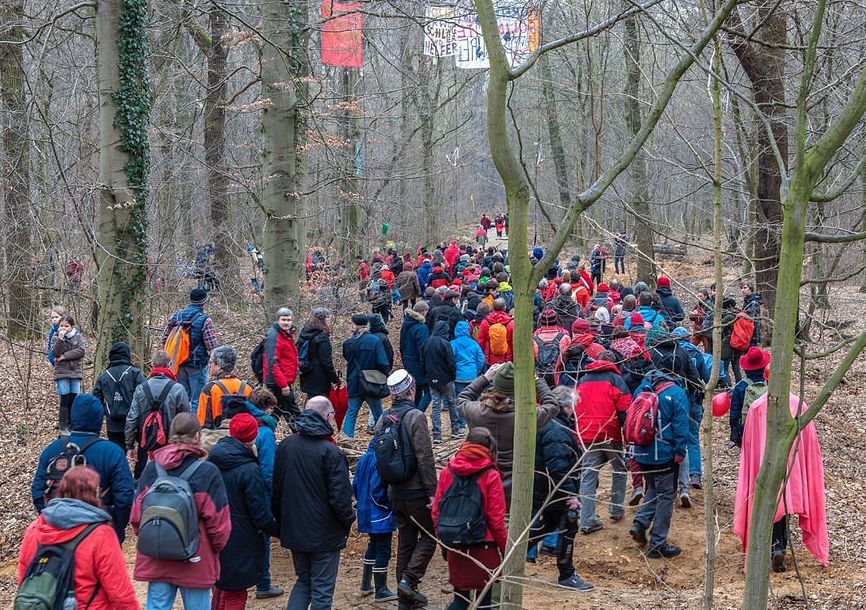 The Red Line action on Sunday 19. of February brought 1300 people to the Hambacher Forest with buses coming from Netherlands, Belgium and Cologne. Hundreds of people walked from surrounding villages and the Buir train station to the sounds of a Rhythms of Resistance percussion band and converged before roadblocks into the forest. Here the introduction speech took place. Michael Zobel (who leads the forest walks) openly asked newcomers to raise their hands, with at least half of the participators doing so. After walking into the forest, making sure that all stay on trails to reduce erosion, the first talk inside the forest took place at the “Lake”, where an activist duet sang covers of popular tunes redone with ecological and climate lyrics. Next stop was OakTown, where activists wearing carnival masks and wigs waved from tree houses, lowering wicker baskets to be filled with gifts and donations for the occupation. The humorously referred to as “mayor” of OakTown, Clumsy, demonstrated abseiling down the rope and talked about living up in the trees. Next on the tour came the newest treehouse village: Gallien. Here the visitors were serenaded by a forest defender sitting on a monkey bridge between tree houses playing guitar. The forest-walkers’ interest in the occupation led to many conversations with the activists, resulting in organizers hurrying people away to keep the walk on schedule. After walking all across the forest, hot meal and warm matcha tea was shared with all. Before the action the police were asked to identify themselves and several raised their hands. Their presence could be explained by both gathering of intelligence for future eviction actions and for reasons of public relations. Their presence was met with clapping by some of the participants. This was not the easiest thing to accept for many forest defenders who have, are and will continue to deal with physical repression from the Police. In a line two people side by side, the red clad participators formed a line, and with banners and flags marched down the old A4 highway, separating the remaining forest from the clear-cut area with the mine. Here a banner was dropped by camouflage clad activists in the trees. Most people in the line were wearing red, had red banners and included a generational cross section which besides many children and elderly folks also included members of the local motorcycle club. Stretching a long strip of red fabric down the highway, the action symbolized drawing a a border, a red line, from which we will not accept or allow the continuing destruction of the Hambacher Forest and CO2 emissions associated with RWE Operations.
Some stressing resistance and direct action as the main form of activism would argue that this was largely a symbolic, photo-op action, but such statements would ignore: the importance of wider support for this movement; the need to combat disinformation and propaganda distracting from the violence and injuries inflicted by the secus and the police by letting people interact and talk to the forest defenders. Great numbers also strengthen the climate movement and ecological movement and make many in the forest feel less marginalized. It is important to maintain this unity and strength by also critically looking at the dynamic of repression and its role in silencing activism and in the co-option and utilization of law enforcement and justice structures by ecologically and climate criminal corporate enterprises such as RWE.