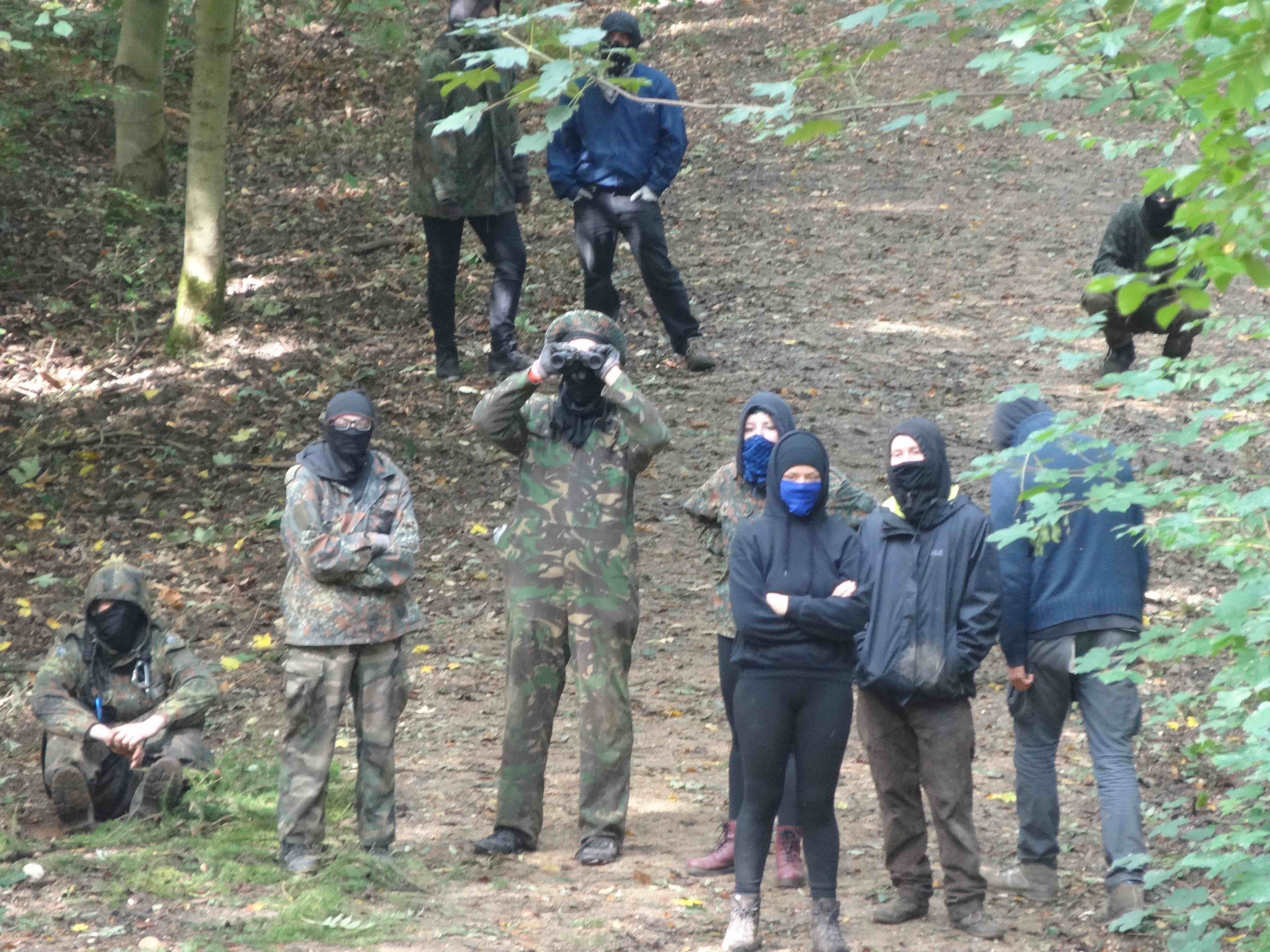 On September 19th at 8 o’clock in the morning approx 100 cops entered the millenarian Hambacher Forest, occupied for last six years blocking the expansion of RWE’s open cast lignite mine, to remove the “The Tripod”, a live-in barricade. The official state line was that it was to keep the roads open for emergency vehicles in case of accident occurring in the forest. The emergency vehicles are the harvesters, bulldozers and loaders of this years cutting season which will begin on Oct. 25 and the “accident” is the global climate chaos, millions of premature deaths a year, and irreplaceable habitat loss to which Hambacher (cynically named after the forest its destroying) Mine: single largest net CO2 emitter in Europe, is not an innocent bystander to but rather a culprit extending its effect through emission and pollutants and through RWE Global Power Conglomerate machine impacting and destroying communities and ecosystem from Colombia, England and Germany to Siberia.
When the police entered the forest they at first surrounded the Tripod to prevent supporters joining in the two blockaders, one of whom was locked on the ground to a concrete lock-on and the second who was in the top of the tripod which in its mid level included a platform with a tent. Through walkway from a neighbouring tree additional person was still able to join those on the inside. For the next 5 hours the cops massed up around the barricade as large bulldozers removed the barricades leading into the heart of the forest(each year a 500 meter swath which is cut to enlarge the mine) followed by back loaders loading the scrap metal and tarps which comprises left over material from the ocupation and performing a function of trash removal for the struggle. The barricade clearing was also immediately followed by peeps emerging from the forest and rebuilding the barricades behind the heavy equipment often with cops still in sight. During this time the forest resonated with animal calls and music from the approx. 40 forest defenders. As forest roads turned into parking lots for long lines of forces of repression paint and bottles of bitumen were thrown at the police vehicles. Pigs responded with snatch attacks at the people singing and playing drums in solidarity around the Tripod. All together 5 people were grabbed and later released.

By 1 oclock cops begun to cut the barbed wire connecting the wood stocked around the ground level of the Tripod and got to the forest activist locked on under the table of Tripod’s kitchen. For over 2 hours they went at it with their power tools. And as concrete cutting tools echoed in the forest, climbing cops started to get on to the tree with the walkway ropes attempting to cut the lines and cut off the activist who descended into the tripod and was doing support to the people inside. Lower branches were being cut off and ladders attached to the tree giving enough time to make it back across and into the crown of the tree where the two climbing cops followed. Holding out for over an hour in the thin top branches the two climbing cops a meter and a half below attempted to convince the climber that they were just concerned with the person safety and that the activist needed to be removed before proceeding to the tripod. Eventually they gave up and descended from the tree to the tripod where for over an hour they tugged, pulled and then stepped on the tripod defender and later had a hard time removing him as he lay limp in the fork of the tripod. Once on the ground popo attempted to use pain compliance bullshit to try to get him to walk but that did not work either and he was dragged and then carried to the cop car.
Overall this has been one of the longest road barricade evictions with over 9 hours of struggle and when the cops left the forest the barricade building and food sharing resumed in full.

This year especially is an important time for the Defense of the Hambacher Forest as the new wave of deforestation is about to ensue during this winters cutting season and as another Direct Action Skillshare Camp will take place in the forest from Semptember 25th to Oct1. October 1st would have been the official start of this years cutting season which has just been postponed to October 25 as RWE is forced to appear in Administrative Court in Cologne on October 17 by a law suit initiated by Bund fur Natur as a response to the company’s lack of enviromental assesment studies, its lack of studies of costs of post extraction clean up and last but definitevely not least: two colonies of endangered bats being discovered in this year’s cutting zone. In November COPP summit will also take place in Bonn which is in the middle of North Rhine Westfalia coal region. That in itself is not an accident as the coal industry is heavily coopting the negotiations and framing coal as a transition energy source. Next COPP is also scheduled to take place in Katowice, Poland the centre of the Silesian Coal Mining Region.

Climate Justice Struggle in Hambacher Forest and in countless other locations around the world is a response to the Neo-Liberal Extractionist Agenda of Disaster Capitalism and a call to preserve every community every organism being paramount to protecting Planet as a whole.