Solidarity with Bure Struggle under repression 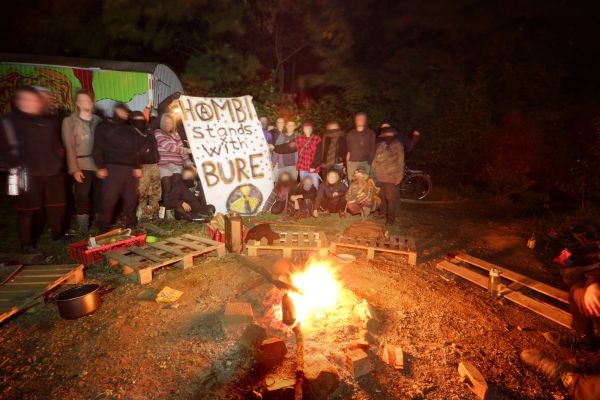 Last week our Comrades in Bure France who are resisting against a planned radiation storage facility by Andra were raided by aproximately 80 gandarmes who broke through the doors of House of Resistance. The pigs who also closed off the surrounding roads and broke windows of the cars and vans parked in the vicinity have seized the usuall loot of weapons of mass communications in the forms of computers and phones. They were able to compromise the encrypted drives and are now thretening charges to the people who can be linked to the electronic content. This is yet another example of how the state engages in ever increasing sureilance and repression dinamic that is so crucial to functioning of the viscious loop of exctractionism and disaster capitalism. Facing such massive resources used not for addressing social and ecological issues but for imposing the state of planetary ecological disintergration it is that which is being targeted and destroyed that becomes our biggest and most powerfull weapon. That is the communities we form and which are aready part off, solidarity, mutual support and song and rhytm.

Comrades at Bure, You are not alone in your fight, remember that Hambi zone of occupation is also your home where you can share your songs and music of the resistance and even at the distance you are still connected with and inspire many struggles worldwide such as the anticoal struggle in Hambacher Forest.