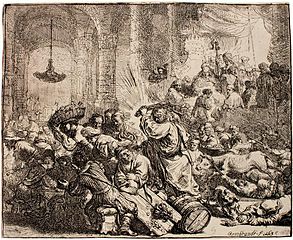 Jesus driving the merchants from the Temple, etching by Rembrandt

It’s that time again: the feast of peace is upon us. Millions of ducks, geese, pigs, turkeys, carps, cows, chickens, rabbits, roes and others have to put their heads on the block for it. I’m dreaming of a red Christmas. Their horrible lives end with a horrible death, so that on Christmas eve they are put on tables where is more disputed than on any other day. It is so nice to put the corpse of a victim of violence on the table at such a peaceful celebration. Before that, gifts have to be bought, in brightly lit pedestrian precincts or at mail-order stores, which treat their employees like the last piece of shit to squeeze more out of them.
The returns (in the mail order business, depending on the product, over 50%) are often destroyed, because anything else is too expensive. https://www.wiwo.de/unternehmen/handel/online-retailer-amazon-destroys-massive-quantities-of-returned-and-as-new-goods/22662746.html. This does not only apply to the top dog in the mail order business.

Questions are being asked, such as: “Where do we celebrate (=eat) on Christmas Eve, where on Christmas Day, where on Boxing Day?” A finely tuned hierarchy of guzzling which expresses the value of our relationships. Glory to Mammon in highest heaven, and gluttony on earth to those with the fat bellies. Luke 2:14.
In order to avoid that the fragile family peace breaks, there is a lot of busy talking on the phones before, and certain topics are declared to taboo minefields: politics, the legacy of the (still living) granny, any money, the way of life of Ida (where do you come from where do you go when will you come back?). And yet, Christmas is the festival of separations. Howtos are giving tips on how to avoid this or to deal with it. https://www.babble.com/relationships/how-not-to-do-christmas-lessons-from-my-divorced-parents/

This feast commemorates the birth of a man in whose name crusades, massacres of “witches”, and countless wars were and are staged, blessings of weapons, suppressing of colonial peoples, treating of women as inferior breeding machines, and God knows what else. Long live Christianity, the religion of love! Take a hot mulled wine and some cinnamon star cookies, then I’ll tell you about the Ⓐnti-capitalist Jesus, the animal liberator!

Was the one, after whose honorary title (the anointed) this religion was named, really such a monster? Actually, he is always portrayed as a pacifist: “If anyone slaps you on the right cheek, turn to them the other cheek also.” (Matthew 5:39) Today, he might say, “Go on, you’ve already lost, because the future is me.”
That he was not a pacifist, but a rather militant anti-capitalist, shows us the story of the cleansing of the Temple. At that time, the trading in animals to be sacrificed in the temple in Jerusalem brought a lot of money, which was earned by the temple authorities, the animal traders and the money changers. Jesus, known to be a pious man, came with his followers and they overturned the cash tables of the changers, liberated the sacrificial animals (most of them doves, the poor people’s sacrifice) and drove the merchants out of the temple. That was only possible because enough people joined in. This event convinced the powerful high priests: that guy is dangerous and has to disappear. What happened then is just too well known to us today: He was declared a violent criminal and a public enemy. Well, his action was not completely nonviolent! After being acclaimed by many people as he came into town on a poor man’s mount (today we call it Palm Sunday), his fate was set: a few days later he was arrested, tortured and killed. Like his cousin John Baptist before.
We are already used to that: actually the mighty ones themselves were the violent criminals. They skillfully manipulated people with lies: they claimed that the real reason for the death sentence was his blasphemy and not their own greed.
Laschet and Reul, members of the Great Sanhedrin of North Rhine-Westphalia, do not want to believe that the C in the name of their party CDU has a meaning completely different from what these good followers of their own kind of Christianity are doing. They should read the New Testament.
A rich young man came to Jesus and wanted to know how to live properly. The answer: Sell everything you have, give the result to the poor, then come back and we’ll see.

Seen in this way, the people in and around the Hambi Bürgewald (= Guaranteed Forest), who eat what others throw away, are better Christians than the above-mentioned members of the High Sanhedrin who, during their terms of office, do their utmost to get afterwards good jobs in the companies of their godfathers, or than a millionaire like Friedrich Merz with his two planes, an alleged member of the upper middle class, who advises the poor people to buy shares for their retirement.
Most Hambi people do not call themselves Christians, some even hate Christianity. There are really good reasons for that, see above. And yet they are the better Christians. Because in their militancy, they also follow a saying by Gregory the Great, Pope from 590 to 604:
“Reason can oppose evil with greater force, when anger serves it helpfully.”

We wish all of us a reasonable, so angry feast.