Eviction from the Dannenröd forest

The last treehouse village in the #DanniBleibt fell today. But anyone who thinks that we as a climate justice movement are giving up now is wrong.
Because this was just the beginning.

That was only the clearing. At the planned start of construction itself of the motorway, it will be election campaign time, so those responsible for this “traffic policy” will have a lot of stuttering to do again! We are curious to see how they will handle that.
Because no more highway will be built without resistance! 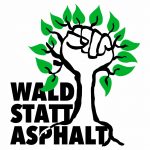 Climate reversal is also a traffic reversal. It is therefore clear that certainly all Hambi fans are also fans of the Danni forest. Now we have to report on the eviction, e.g. from sources like Twitter: @DanniTicker
#DanniBleibt , N.irgendwo im Danni and from the blog, see logo left: “Wald statt Asphalt”, forest instead of asphalt!