A bit late, we found this article on Indymedia:

In the early morning hours of February 1st 2019, a group of activists successfully sabotaged two electrical boxes of RWE Power AG near the open-pit lignite mine Hambach (NRW, Germany). With prepared incendiary devices, the boxes’ electrics were irreparably damaged. The electrical boxes all around the 8×6 km mine provide electricity to pump the ground water in the whole area 450 meters below ground level – with severe consequences for flora and fauna, as the bordering Hambach Forest, a forest that is thousands of years old and gives home to numerous rare and protected species.
With this action, we achieved not only to destroy a part of RWE’s infrastructure directly, but also wanted to continue to cost the company money for replacements. Further, steady militant actions keep RWE’s security and the cops busy and express our resistance against climate killers, forest cutting and the criminalisation and ongoing evictions in the now seven-years old anarchist occupation in Hambach forest. Increasing repression won’t silence us and we will not be intrigued by “political” solutions, once again confirmed by the latest “solutions” by Berlin’s co2al commission. We demand:

The action took place within the context of various militant actions around lignite mining and the Hambach mine in the last years that we stand in solidarity with. We, activists from the Hambach Forest, have occupied the Eppenberg Forest since 02/15/2019. On an area of about 40 hectares, this is to be cut down for an industrial area. This, although there are already such areas with large unsold lots in the immediate vicinity.
Open Street Map more…

On January 27th, exactly four years ago, the city of Kobane in northern Syria was freed from the hands of the gangs of the so-called Islamic State after months of fierce fighting by the courageous fighters of the YPJ and YPG. At that time, we poured onto the streets in our millions, day after day, week after week, to express our solidarity with the Kobane resistance and to compel the world to act. Nonstop, powerful actions outside the Middle East gave the comrades fighting in the city courage to continue and forced the international powers to act. more…

This is the updated action map of (almost) all barrios in Hambach Forest. To use it by yourselves, to print and to forward to others. Click on it to see it full size.
General overview: Open Street Map more… All tree caves are open again!

5 weeks of intensive commitment to the opening of tree holes are behind us – now the goal is reached!

A GREAT THANK YOU to all who were involved with heart and hand: activists, friends, visitors, biologists. Everyone helped in giving back place to live to bats, birds and dormice and making Hambi more alive. more… 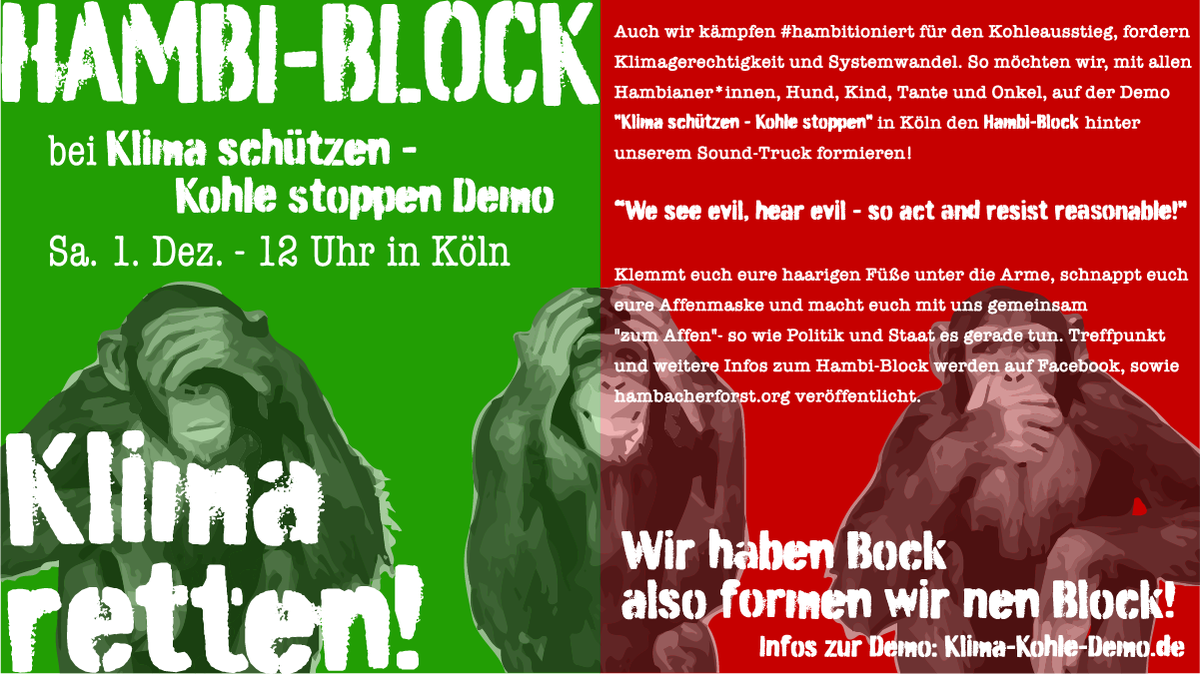 “NONE AND ALL ARE SAFE” NRWE CLIMATE DYSTOPIA by Herbert Reul

Herbert Reul, the RWE (Rheinisch-Westfälisches Elektrizitätswerk) employed police chief and interior minister, fresh from staging the largest police action in North Rhine – Westphalia ever, this Monday gave a speech at, yes, “Literature Festival Against Violence” in Wuppertal. He spoke at a retirement home and instead of a table with books and an author signing his works, the lobby was full of police, there was no information or schedules nor mention of other events one usually sees at literary festivals like this even in smaller towns, instead there was private security, body guards in business suits and sunglasses. more…

We, an autonomous group of environmental activists, occupied today, Monday Nov. 12th, 2018 an excavator in the Garzweiler open pit mine near Keyenberg.

No jobs on a dead planet – digger occupation in Hambach Forest

In the early morning of Sunday, October 21th, 2018, a group of activists once again occupied and thus blocked a digger in the coal mine. The activists climbed up peacefully and attached banners saying “No jobs on a dead planet”, emphasizing once more that the action is directed against the coal mine and not against the workers.

The folks wanted to raise awareness about the fact that a temporary stop to deforestation does not put an end to the destructive coal mining. Still nature is being destroyed, villages demolished, people being forced to relocate and whole regions of land being devastated for the generations to come. While they are continuously hiding behind practical constraints of public concern, coal extraction is continued for private interests only. more…

Behind us are exhausting weeks of fighting for the Hambach Forest, which were filled with scenes of violence and escalation by the police against peaceful occupiers and demonstrators.
Despite the provisional clearing stop and the somewhat calming around the quaint forest, the fight for local and global climate justice is far from over! The tree houses, the habitat of so many people in the forest, were destroyed in an emotionally cold way, but the memories remain and we are still here!
For RWE and politicians remain faithful to their crushing and life-negating agenda and always try to confront the public with fait accompli. Although it is still unclear whether the pit will ever be expanded by Manheim, urgently needed homes are razed to the ground every day. more…