The following text has reached us:

We are aware of the risk of spreading the Covid-19 pandemic at large assemblies of people. We can’t look into the future, that’s why the skillshare will take place until further notice.. When the date gets closer, we will keep you up to date in case of any changes. 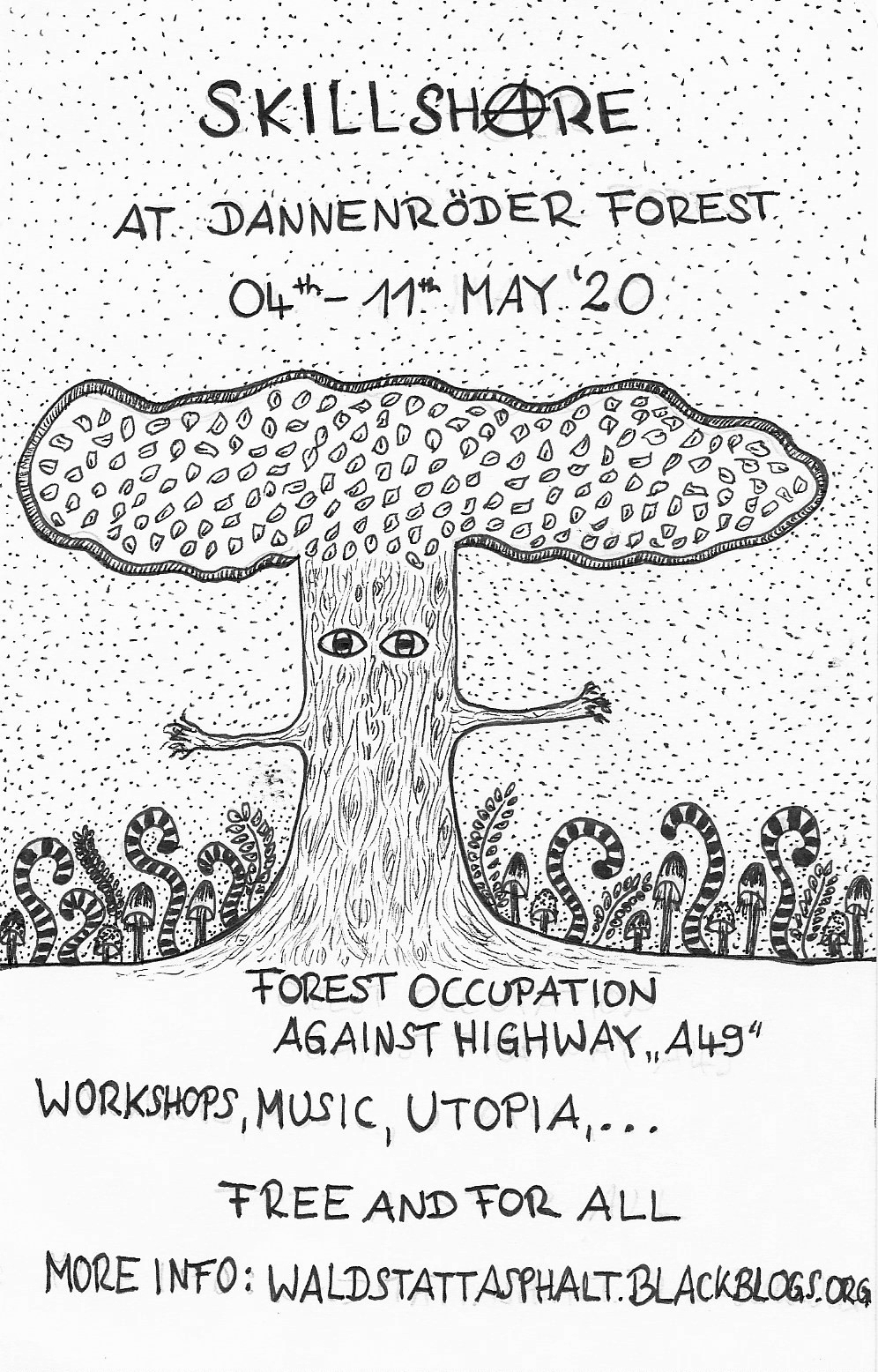 From May 4th until 11th there will be the first “Wald statt Asphalt” Skillshare Camp in Dannenröder Forest!

A new section of the A49 motorway will run through the forest. Therefore many, partly very old leaves and conifers, which are still full of life at the moment, will give way to the cold asphalt. The planned so-called “compensation measures” clearly do not fulfil their purpose and definitely do not compensate for the loss of several hectares of a centuries-old mixed forest. Furthermore, a new motorway will not, as advocates hope, bring traffic relief to the affected villages and will only serve the capitalist interests of companies based in the nearby urban village such as “Ferrero” or “Fritz Winter”.

The forest has been occupied since the end of September 2019 in order to stop its destruction by the expansion of the A49 and to bring about a traffic which doesnt destroy the climate: freee public traffic on trains, bicycle and walking. By occupying the trees, the clearing work in this forest has effectively been stopped and suspended for at least one year. The activists will not tolerate inactively that living trees are killed in the Dannenröder forest for a failed traffic policy. As long as the occupation exists and beings are fighting there, there will be no highway in the Dannenröder Forest!

There are different ways to be part of the skillshare, e.g. participating in workshops, offering them yourself or just getting to know other great beings.
more… The criminal case against five activists because of the blockade of the Weisweiler power plant goes into the final round. Simultaneously with the climate negotiations in Bonn in 2017, one of Europe’s dirtiest CO2 emitters had to be shut down almost completely for several hours. more…

See you in front of the court? more…

We are happy to announce that David Rovics will not only be on October 17th in the Allerweltshaus in Cologne, but also on October 23rd playing in the hambi. Details about start time and place (meadow or forest) will follow soon. Come in plenty!

The second Skillsharing Camp of this year will take place from September 15th to 23rd. Here is the current Timetable.
We, the orga team, are currently very understaffed. If you are currently in the forest and / or in the meadow and you can imagine helping, then write to skillsharing.hambacherforst@nullriseup.net. No prior knowledge required 😉

We still don’t have a kitchen crew. If you happen to be a culinary collective that can imagine cooking in the period then write as well.

Also artists, speakers and people who are already in demand can write.

The trial because of the tripod, which was suddenly on the Hambachbahn during the G20 summit in Hamburg, goes into the second round. After the district court Jülich has sentenced the two defendants in the first instance to a fine of 90 or 100 daily sentences, the appeal is now being held before the district court of Aachen. So to make you know what you are getting into, first a few quotes from the official protocol of the first instance:

“The following court order is then issued: It is forbidden to disturb the course of the meeting by calling or throwing objects from the spectator area…”
more…

On 17.05.2019, a lawsuit against an anarchist from the Hambach Forest will begin.

He is looking forward to a large audience!

deutsch | english | español
UPDATE April 24th
18:03 All who were imprisoned on April 23rd and 24th are free.
14:26 Over the next hour and a half, two people from House 1 will be brought before the committing magistrate at the Düren court house. Support desired.
12:50 Police operation ended. Everyone leaving the scene.
12:33 People in the trees are being evicted by climbing cops.
12:32 Eviction of the 2 people on the roof of the new #MAZ that was evicted yesterday is completed. Min. 1 person still in the tree in the garden. 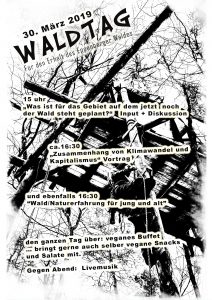 “Hey you out there,

This week the 2nd Hambi spring-clean will take place!

On March 22, 2019, we meet at the gravel pit at 10:00 o’clock, equip ourselves with garbage bags, garbage tongs and gloves to clean the forest from the garbage. At 3:00 pm the garbage will be picked up. Collecting point is on the L276 at the parking lot next to the slip-road to the ancient motorway A4. more…