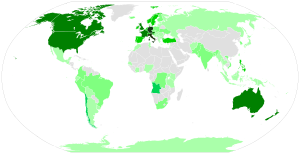 We are very delighted to hear, that Greta Thunberg dedicated the Golden Camera she won to the Hambis, but it is not very amazing: we struggle for the same goal. We do not want to participate in any personality cult, and Greta too is far from that, as this dedication shows. This dedication comes immediately after a new repression, allegedly due to a fallen bucket (“throw of feces”). It is the many many people – and lots of them being young – who no longer want to accept how their future is being ruined. See picture left.
“We want you to panic!”
The award ceremony not only shows Greta’s speech, impressive as always, but also the audience’s response as she dedicates the award to the Hambis. She has to interrupt her speech for thunderous applause. Well, Armin and Herbert and Dirk *), probably this is not what you wanted, when you thought, you just could throw out the Hambis for your RWE bosses, right?

@HambiLluna wrote
As an appreciation of her solidarity, we, as #hambacherforst activists, would like to give a harness to @GretaThunberg. We would love to see you in the forest on a Friday. 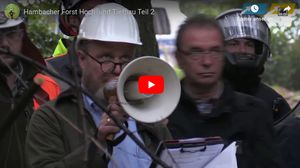 No subtitles by now, but this is no problem. This report gives a good optical impression of the eviction of the forest autumn 2018, from above and beneath.
Part 1

Original title: Hambacher Forst Hoch und Tiefbau
Building and civil engineering
“A film about the Hambach Forest, an insight into lofty heights, deep precipices, an eviction and what I have to do with it – all this happened not so long ago between Cologne and Aachen.”
Only at the beginning there is pretty much text in German, otherwise the film speaks for itself.
Part 2

This week we’ll be screening the Brand trilogy by Susanne Fasbender at the Hambi-Camp in Manheim. Impressive and sometimes surreal oppressive scenes from the coal country of Rhineland (and in particular the Hambi) depict the epic devastation caused by resource extraction & land grabbing in context of the economic growth paradigm and the climate crisis – a process that has been affecting this region across generations now.

Premiere – Resistance in the Global North

In November 2012, an activist with an elaborate tunnel entrenchment in the Hambach Forest ended the silence surrounding the deforestation of this formerly gigantic forest area in the city triangle, Cologne, Dusseldorf and Aachen, which had been in operation since 1972. Far beyond the local borders, the clearing of the ancient Hambach forests by the energy company RWE became known. Today only 10% of this forest is left. Activists from various groups had set themselves the task of making the Rhenish lignite mining area a focal point for the fight against coal-fired power generation. more… “The Forest from Inside”
A poetic film with observations from inside the Hambach Forest and its destruction.
The text is spoken in Spanish, a translation is planned. Thx for sharing! more… Last week, a team from the German TV channel ARD was in the Hambach Forest. Their report was on television on Thursday, 12/28/2017, and now also at
http://mediathek.daserste.de/Morgenmagazin/MOMA-Reporter-Was-wurde-aus-den-Aktivis/Video?bcastId=435054&documentId=48753082 (high resolution)
and https://www.youtube.com/watch?v=lV1S7codk80
Both links will be opened in an new tab.
Although the language is German, you can get a good impression of the troubles on the secu road, at which the TV team accidentally was present, the day after the stop of the deforestation.
More info: Live Ticker Barricade Eviction 12/20
The film also shows the result of this year’s clear-cutting, which lasted only two days and the team also visited a tree house.

Advent atmosphere at the Aachen Christmas market by experimentellerrand on Vimeo.

Rhymes for action on the frontlines of globla resistance.  Sung for Hambacher Forest Peeps as the mainstream WDR media told us to get out of the way as we filmed this and then removed us from most of their shots.  No compromise in getting our message out, alowing it to be diluted, reframed or apropriated.  Our solidarity goes to comrades in Zad the Notre Dam who never welcomed media with open arms for this reason.  This is also a reminder to chanell the intensity of this message into an independent media and prepare our cameras and smart phones as weapons in the battle for the future of this planet as a livable location for multitude of species, organism and communities.  We can only rely on the mainstream profit-based media to ignore not just our presence but also the repression and violence that we are about to face.

“Don’t Hate the Media – Be the AutonoMedia!” Calling on videographers, photographers and artists to come to the forest and document a reality on a brink of extinction and to come when the attack and state violence beggin and document it.

All used digital cameras, phone, smartphones, and keyboarded and keyboardless data entry devices for press work and documentation work would be more than apreciated by all the barrios through out the forest.