The name of this house, Randale, means Riot. There is a beautiful treehouse, specifically designed by and for FLIT people (Frauen, Lesben, Inter- und Trans-Menschen = women, lesbians, inter and trans people). Attentive observers, of course, immediately notice that there is still a stove missing. donations are welcome!
Pictures: more…

As soon as barricades are destroyed in the Hambacher Forest they have been rebuild often even right behind bulldozers and before cops left the forest. This friday was no exeption but for the fact that this time also bread and roses have been put up in the place of destroyed barricades protecting the forest. This is connected not just with not continuing the resistance on an empty stomach but also with "Stones Are Our Breads and Barricades Our Dinner Tables." action that happened during this cutting season. It was also inspired by 1912 Breads and Roses Textile Strike and Riots in Lawrence Massachusetts which were organized by women and united over 30 different ethnic groups and also used workplace sabotage. The striking mothers with their children were brutally attacked by police at a train station as the kids were being sent to live with supporters when due to the prolonged strike the families could no longer feed them themselves. This resulted in international solidarity and finally with congressional hearings, positive workplace pay increase settlements, changing of work conditions and eventual shortening of the work week itself.

100 years later is it possible for RWE's irreversible destabilization of the Planet's climate and pumping its atmosphere full of toxins responsible for killing over 7 million people a year, as conservative estimates by World Health Organization indicate, result in equally positive response on the part of today's politicians?

The latest police action of clearing the barricades opens up the Millenarian Hambacher Forest to destruction by RWE and its release of megatons of carbon and a long list of toxins that lay below its floor and its roots. To be pumped into the atmosphere in the name of profit and greed regardless of the consequences showing that this time as well there will be no response that has anything to do with social and ecological justice on the part of legistlators, politicians and cops all deeply co-opted by the special interests of the coal industry without more radical actions such as those at the Hambacher Forest.
—–

Bread and Roses was a title of a poem by James Oppenheim published in 1911 that a year later became a anthem of the strike to be performed through out the decades by numerous artists including a version with historical background by Utah Phillips. 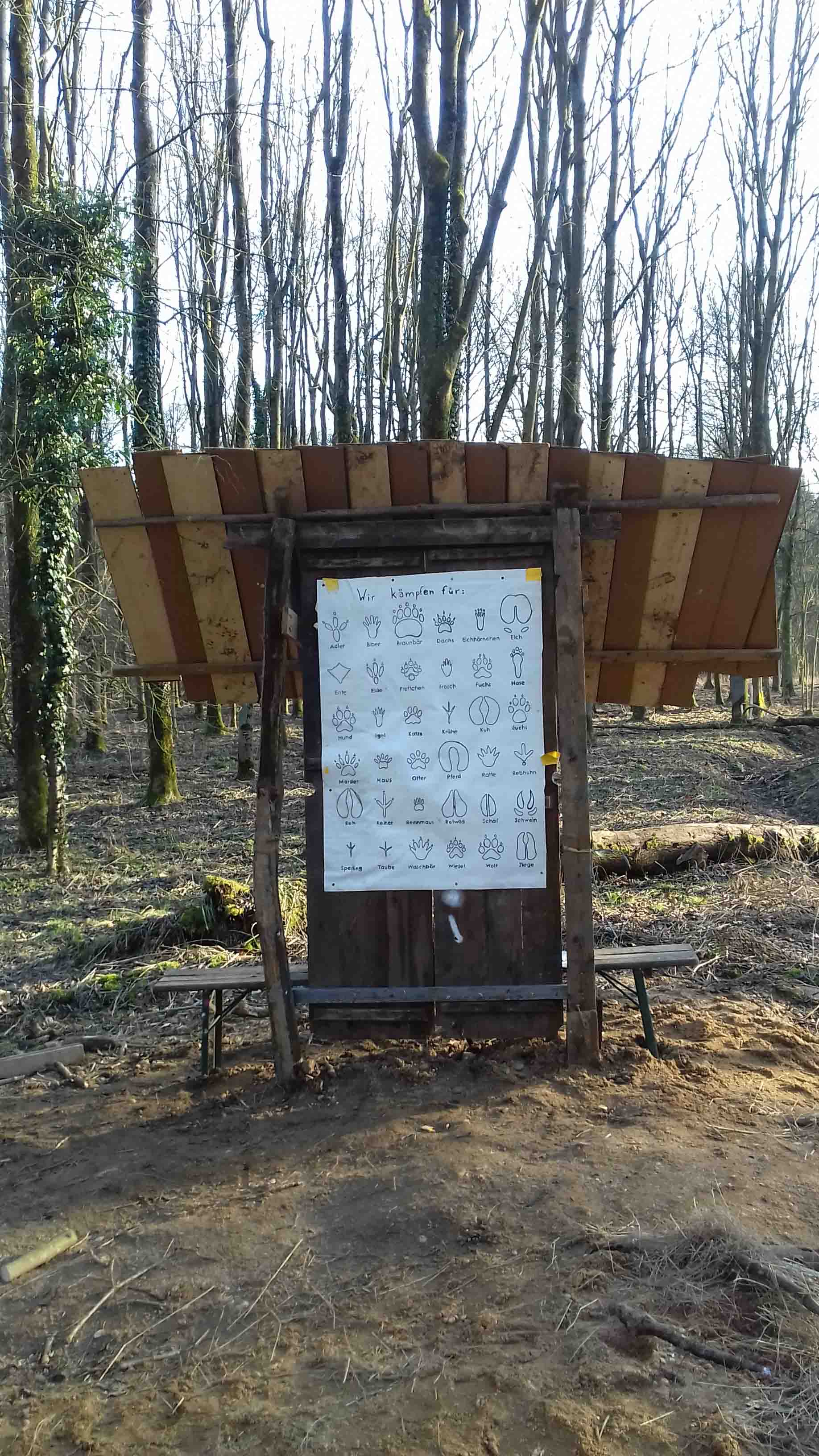 To the list of barricading options in the forest from wood piles, ditches, towers, tripods/skypods and sport and exercise structures a new one has been added: It is a rest point and an info board showing species inhabiting the Forest and on the other side having Hambi posters and events. It should also be a good way to know if secus have been to the forest as they are not able to resist the urge to vandalize any info they see posted about Hambacher Forest or Biodiversity, in which case we will send you updates of “before” and “after” photos as has been done with photos of spots in the forest and what the same area looks like clearcuted after RWE touches it with its destructive hand.

Call for Support: If any of you have any posters size prints showing bird, tree/plant or animal species of European Forests that you could share with us for the barricade info board project please send them to:

or just bring them to the Meadow. 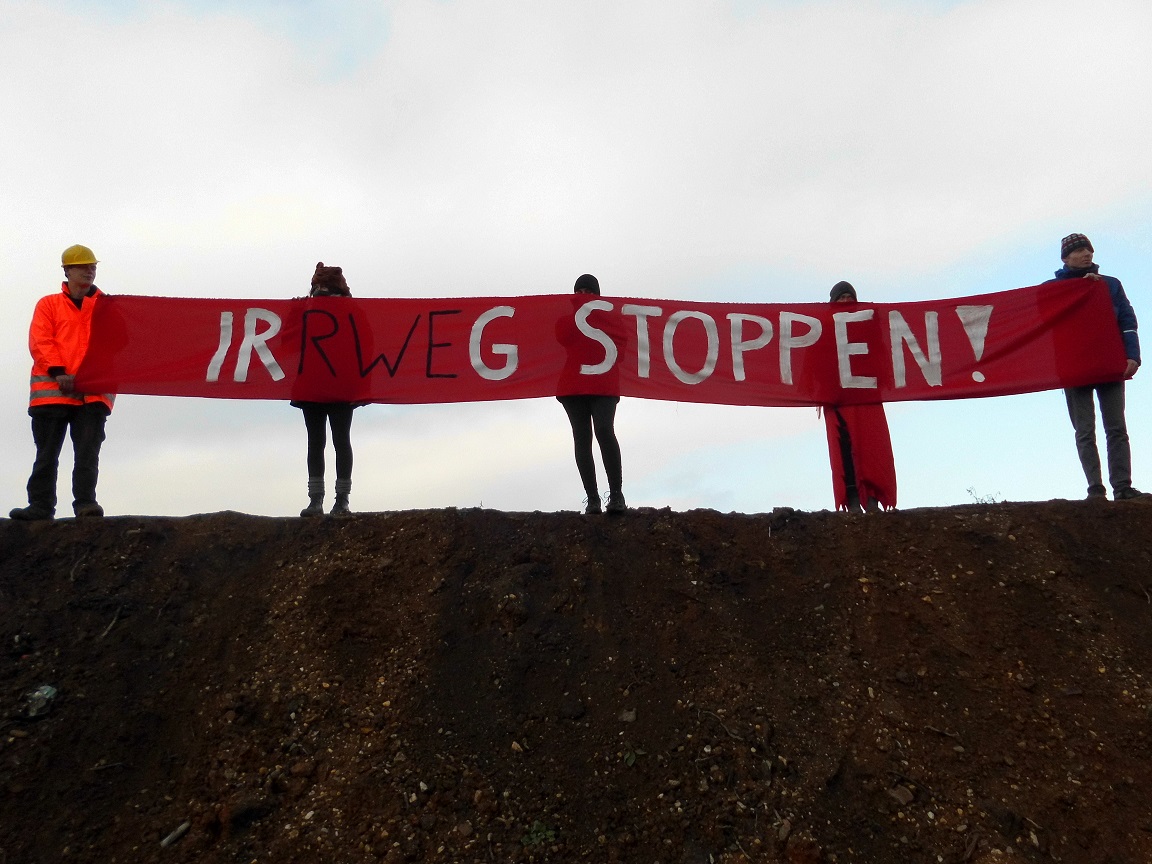 RWE’s destruction of the Hambacher Forest and the emissions from its power plants and their impact on the climate and general health is too destructive to allow and as stated by official estimates, to continue into the 2020’s.

As a response once again a human red line will be made at the edge of the clear cutting of the forest to show the public opposition to this destruction and to express support for the Hambach Forest Occupation.
Please come wearing red, with red fabrics and signs and lets draw a human red line to send an urgent message of That is Enough!, Yo Basta, and No More.

Directions: The meeting point will be at 12:00 at Grilplatz Manheimer Burge on the country road heading straight North into the forest out of Buir’s Train station where you should have no problem following the crowd between 10:30-11:30.

See You in the Forest

While people from the lignite resistance set red lines along the former motorway A4 (upper red line) to prevent RWE from clearing the forest south of it, the company sets its own red lines. 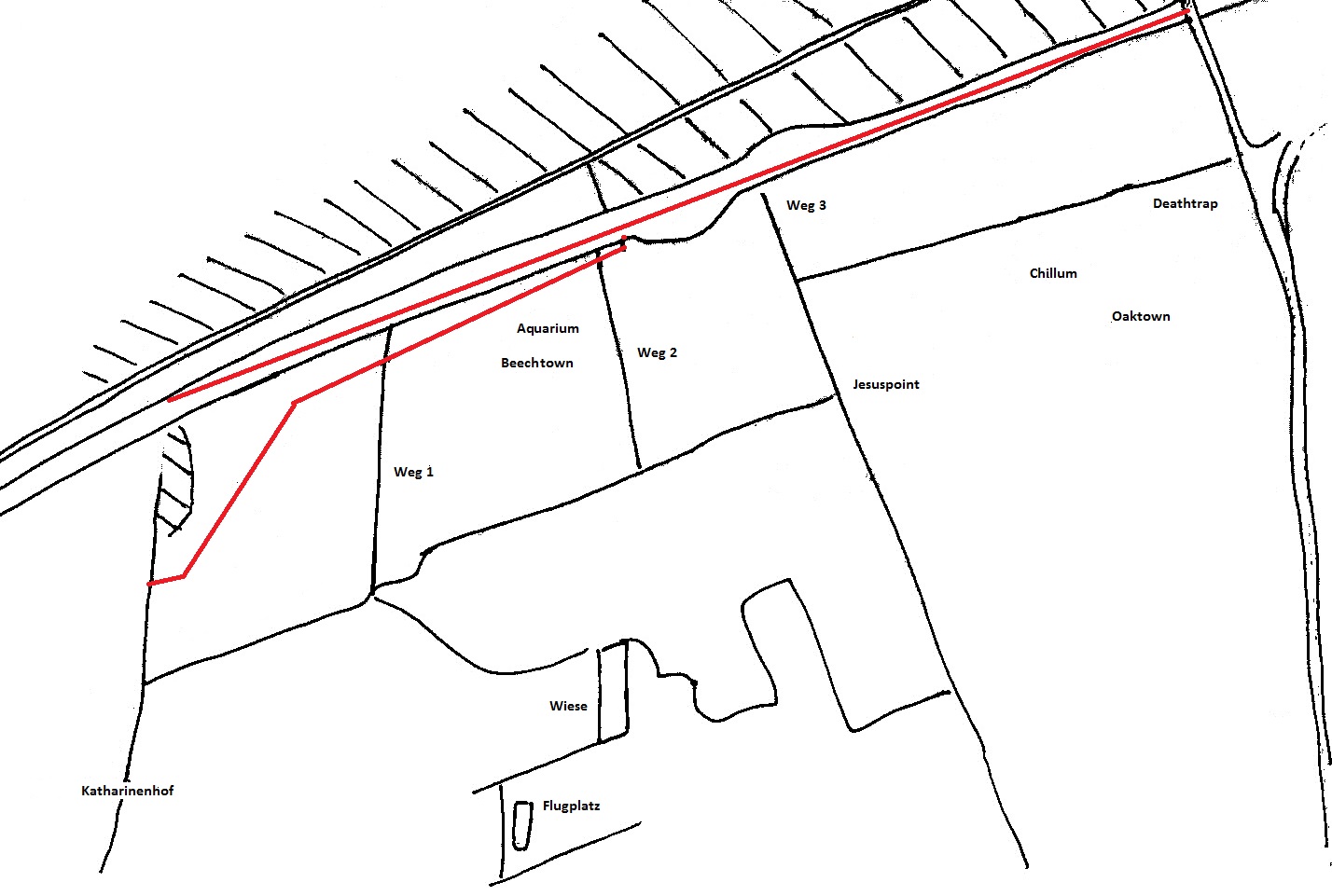 Actually, they are cutting counter-clockwise from east to west, starting at the eastern Secu Bridge (former motorway exit). Probably mid-December, these deforestations are likely to be done. Then they could go on south of the former A4, starting from the west. The already marked forest section covers the area on which the tree protection pictures hang, about 300 by 300 meters (see http://hambacherforst.blogsport.de/2016/02/04/bilder-zur-kunstaktion-im-hambacher-forst-am-mittwoch-den-322016/ <!–and
http://hambacherforst.blogsport.de/2016/03/04/nachtrag-zur-sinnlosen-zerstoerungsaktion-von-rwe-am-montag/–>) (starting at the western barrier, which sometimes blocks the path to the former western bridge), then the line leads in mostly about 100 meters, at the end only 30 meters distance to the former A4 from west to east. About 15 hectares of forest would fall victim to these plans if implemented (and if the forecast is correct – no guarantee!) Pictures (25, from east to west) follow below: more…

Repeatedly we publish on this blog notes, excerpts from diaries or whatever else is going on. They provide an insight into the life in the tree houses of the Hambach Forest. With many pictures.

We are nature defending itself

11/03/2016 Hambach Forest / Aquarium Although the clearing work started a few weeks ago, it was hardly as present as it is today. This is probably due to the fact that the sound of the machines is now closer to my ear. I estimate that today the central reservation of the former motorway is equalized at the height of Beechtown. more…

Last week (Wednesday and Thursday) first clearing of this winter took place, also near the Beechtown occupation, but now for the first time this season on both sides of the motorway, not even a stone throw away from the first barricade. With heavy machinery, first aisles were driven into the forest, undergrowth was removed, and some trees were felled, as you can seen in these pictures. (Click to enlarge) 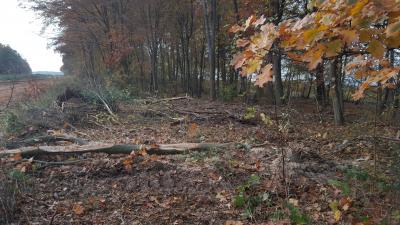 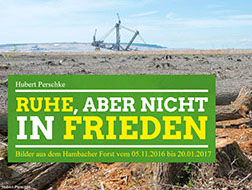 From 11/05/2016 to 1/20/2017, Hubert Perschke presents his exhibition “Rest, but not in peace” in Düren.
It’s worth a visit! The opening will take place at 2:30 pm in the Wahlkreisbüro (electoral district office) of Gudrun Zentis in Düren, Friedrich-Ebert-Platz. Louisa H. Wang will accompany the opening with her music.
Hubert, born in 1947, is a photographer, a graduate social worker and a social scientist. The aim of the photographer is to depict the conflict of environmental activists with RWE Power and to give the visitors the opportunity to position themselves.